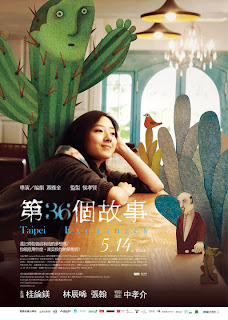 I've been looking for a special slot to put this in since I saw it and I finally found it. The reason won't mean anything to you, but it does to me which is why I chose to review the film today.

The original post on another blog went as follows:
comedy drama about a coffee shop where you can barter for some of the stuff in the place. A beautiful little film Its a sweet little movie that kind of reminded me of a cousin of the wonderful film Antique about a bakery.

Allowing that I was multitasking late at night I'm going to have to recommend the film with the proviso that I need to see it a second time...which considering the smiles the film gave me isn't a bad thing.

A second, third and fourth viewing is also in order. Considering that I saw the film way back on January 9 it's amazing that I remember it when I'm having trouble doing so about some of the "great" films I saw more recently.

Actually one of the things that kept the film alive in my mind was the fact I refused to put the film away. It's been on top of the TV in my room since I saw it and I have refused to move it until I wrote it up for Unseen. Periodically I'll pull the film out and watch some of it and fall under it's spell once more until such time as I had to go off and do something else or get to bed because it's a work night.

The plot of the film has a young woman open up a coffee shop. We watch as she leaves her one job and then begins to put her dream shop together. We then watch as the shop begins to take on nick nacks and the place becomes a place where people can make exchanges, trading various items. We get some man on the street interviews that reflect on whats happening. And we also get stories the stories of the people crossing through the shop, of the people who work there and even some that the various customers tell.It all comes together in a rich tapestry of a film that makes me smile from ear to ear each time I put it on.

As I said at the top, I love this film.

I know I should probably give you details of what happens but why should I ruin the surprise of having a great little film unfold before you...besides the joy of the film is the small moments and great characters that won't translate to the page. Just see this film.

This is a charming film you really need to track down. It would make a wonderful double feature with Rinco's Restaurant which I saw at Japan Cuts back in July.
Posted by Steve Kopian at August 28, 2011