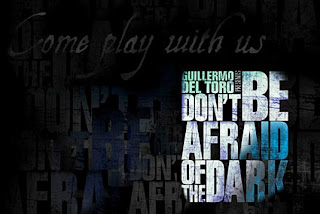 Let's pretend that there is a minimum word count here at Unseen Films. There isn't of course, as anyone who has read Ken's reasoning on why Return of the Jedi isn't a great film already knows.

Go with me on this because simply saying that Don't Be Afraid of the Dark is like a bad TV movie won't make up for the wasted evening nor the 45 dollars that it cost me to go see the film (between admission, train and subway fare and a soda at the theater) seem well spent.

I didn't really want to try and see the film tonight. It comes out in two weeks and I didn't need to see the film when I could see it locally. But since the producer, Guillermo del Toro, plus the director and some of the cast was going to be there I figured what the heck I'd splurge and get a ticket. (my first mistake of many)

Arriving just over an hour before the screening I found the ticket holders lined up out side the theater and the small gallery next to the theater set up for a big press red carpet event. It wasn't what I was expecting, so I went over and asked some one what the deal was (hoping to maybe meet del Toro) and they said they were set up for photos. A couple of quick questions and I realized it wasn't going to be worth pulling out my card since this was really a mindless photo op sort of thing. As I said texted to Ken "Unseen doesn't do red carpet". Not because I have anything against glamor and such, rather we're about the movies themselves.

Amazingly those of us on line were let in with an hour to the advertised show time so I went in and staked out a seat. I then wandered out and got some Twizzlers and a soda. While getting my stuff I listened to four of the PR women, all dressed in almost identical black dresses (most of the women looked like clones with blonde hair and the same dress) talk about things in a manner that I took to be a contest to see who could seem to be the least interested. It was clear they all would rather be anywhere but here.

Back in the theater I was amazed at how many seats were taken up for press and invited guests. It was a good chunk of them. Actually by about ten after seven almost every non reserved seat was taken.

Around seven thirty several of the women in black were milling around looking for someone in the audience and trying to figure out seating. There was lots of pointing and hushed tones. Looking outside into the lobby it looked like a lightning storm with all of the flashes going off...

By seven thirty five I think all the seats, reserved and unreserved, were taken but the ladies were doing some sort of job that involved pointing.

Sometime around ten to eight Gavin Smith stepped up to the microphone and introduced Guillermo del Toro who then introduced the director Troy Nixey, and stars Bailee Madison and Katie Holmes.

del Toro said that he had loved the original TV film as a kid when he saw it "as a fat little kid". He added that when he saw it later "as a fat little man" many of the things he found that many of the things he had loved about the film were things he had put into the film. He said that making the film began with a sixteen year quest to get the rights. He ended his brief statements by saying that despite there not being gratuitous blood and gore we would "crap our pants".

At that point the film started and I realized I should have stayed home.

The plot of the film has Bailee Madison's character moving in with her dad (Guy Pearce) and his girlfriend (Katie Holmes) who are renovating an old mansion with the hopes of selling it and getting it into Architectural Digest. What they don't know, but we do, thanks to a pre-credits sequence, is that there are little monsters living in a hole behind a door in the basement and they want to do us harm, especially to little children.

I'm going to be up front and say I left half way in, I just couldn't waste my time with a movie that isn't very good and showed no signs of getting better (only stupider).

del Toro and Nixey have made a good looking but completely dumb TV movie that hits every cliche you can imagine and takes every twist and ever path you imagine it would. Had I seen this on TV I probably would have thought it was an okay goof, but to pay twenty bucks...nay 45 bucks for a film that is little better than some of the Syfy messes I get for free on a Saturday night is just plain wrong.(Give me Sharktopus any day). The only nod to being on a movie screen are lots of widescreen shots that will make things look small on Tv, other wise this is an old fashioned, not very good TV movie of the week.

Sue me I wasn't amused.

The problems with the film are many, and from a film that nominally under the control of someone as good a filmmaker as Guillermo del Toro this is just unforgivable.

First problem- the film looks and feels like a TV movie, complete with places to insert commercials. When I'm paying big bucks for a film I want something that should be seen on a movie screen not something that is best seen on TV.

Next and most damagingly, the logic gaps in the story everywhere at every turn. Honestly they are too numerous to mention, but I'll try to give you a few.

-Guy Pearce's architect doesn't notice the house has a basement. How can you renovate a mansion and the grounds and not notice there is a basement? How did you miss the stair into the cellar? What did you think was under that grand staircase anyway?
-Mr Harris, the handyman and man who had a family that has worked on the estate for genrations doesn't mention the reason the basement was boarded up was monsters, he just looks on like an idiot as they entry is revealed before finally saying "it's not safe".
-How long have Pearce and his daughter not seen it each other? I ask because they treat each other like aliens.
-The creatures, who are trying to coax Bailee to let them out, try to stab Pearce in the ear...which would have scared Bailee off and kept them imprisoned forever...
-.... or not- because if they could twist the bolts holding the door in place on their own why didn't the do so to begin with?
-If the monsters are pained by light how did they get up to Bailee's room in the day time? No how did they get there to begin with?
-Why does does the daughter look more like the girlfriend then the father (seriously Bailee looks like a mini Katie Holmes)
-Mostly I want to know why Bailee is so fearless. A dark cellar, weird voices behind a boled door, a sense from grown ups that something is amiss and she thinks nothing of it. These little creatures are going to be her buddies... Its the worst case of someone doing something they shouldn't in recent memory.

I could go on but I won't since almost every event made me want to ask why? I'm serious there was not one moment where I didn't want to stop the film to ask a question about the logic and reasoning behind what I was seeing because I could detect none.

Also troubling is that the film has almost no originality, with everything refering back to something else, a movie or a legend, or is a cliche shot to the point that you can, and I did, figure out what shot was going to be next one or what the next event to happen was going to be.

From the moment the film begins where we're swooping through the gate and into the house you realize you've seen this all before, even down to the camera set ups. This is the sort of a film that any film nut worth his salt will be able to say what the next bit is going to be with out breaking a sweat. I had a bad feeling when the original owner of the house was pulled through the tiny door by the monsters in a manner I'd seen several other times. It was a feeling that got worse as we had a down the drain moment.

When Bailee wanders off behind the house she crosses a ring of mushroom, so I was right that the next shots would be of a "magical" garden (similar I might add to one in Pan's Labyrinth)

When she is pulled away after discovering the over grown windows of the cellar by Mr Harris everyone goes on about how it's not safe to wander the grounds because it's prone to sink holes.

Sink holes? Really? And you're planning to sell the house...to who? Who would buy a home that even had a chance to go into a sink hole...oh wait Guy Pearce would.

Sorry I said I wouldn't go on about the logic gaps but there I go again.

There was laughter at several points in the film. I'm not sure if they genuinely found the humor funny or if they were laughing at the film. (Me I kept wishing some combination of the crews of the Satellite of Love would show up).

And yes there are a few scares. Mostly of the loud noise jump variety, not quite as jarringly as Insidious but of a similar nature. (Truth be told while this is probably a better film than Insidious on many levels, I would rather see that film again than this one simply because there are a few genuine chills in that one and in a weird way it's a much more honest film).

After about an hour I got fed up and walked out. I would have done it earlier but I didn't want to run into Guillermo del Toro in the lobby and feel the need to tell him he ripped me off and disappointed the hell out of me. I expected way more from him. I know he produced it but he did write it so he is to blame for the diretor and the script.(and since I left early you'll have to find reports on the Q&A elsewhere.)

I'm sure some people liked this, some of the people next ot me were smiling. And I have no doubt this will play better on TV, which is where I think you should see this. I just don't think that this film is worth the time, effort and money to see this in a theater. I got ripped off you shouldn't have to.

ADDENDUM-
I recently had the oppurtunity to see the film again, this time all the way to the end. My feelings for the film are more or less the same however one thing has changed.

First I do think that if you take the monster sequences on their own terms they are pretty damn scary. They are mini masterpieces of horror,especially sequences like the bath tub one.

Unfortunately the film still doesn't make a hell of a lot of sense. It staggers from good sequence to good sequence by passing through some half thought out ones.