Attack of the Galactic Monsters 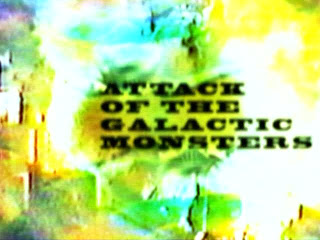 Today and Thursday I'm going to take a look at two fan made films that were on IMDB for a while, but have been taken down. They are films that seem to be of uncertain origin but are basically the work of a fan or fans who only wanted the good parts of some movies.

Attack of the Galactic Monsters is a barely hour long mash up of the Japanese film War in Space mixed with Zone Fighter episodes and other similar stuff brought together to tell the story of an invading bunch of aliens and the earth counter attack.

Mind bending, mind numbing, strange, and the work of someone who wants to see monsters, including Godzilla, fight each other as space ships blow up cities. While the monsters are fighting and the ships are attacking the film carries you along in a weird torrent of eye candy from Japan. It's the sort of thing that touched the inner six year old in me who always hated waiting for the attack parts of the Godzilla movies I love so much. This is largely just good parts...

...unfortunately there is an attempt at plot and the sections that deal with said plot drag the film down simply because there is way too much talk for such a slender film. The patch work nature of the construction also leaves huge jagged gaps in the films damaged internal logic.

Truth be told I had a blast watching it, but at the same time I don't need to see it again. I mean the film is really a mess...once was enough.

How can you see this film?

Blind luck. I'm sure you can probably find it on the Internet if you look hard enough.

The trouble with the film is that it's in a weird ass moral place that made me question whether I should even mention the film. Clearly it's copyright violator from the outset, but on the other hand no one is making any money from it other than any collector who might be selling it. From my stand point it's made me track down legitimate copies of it's source material... and the film is out there.

Should you try and find it? For me the question is it worth the effort? If you are inclined to nonsense like giant monsters fighting, and if you happen upon it, give it a shot. I don't know if it's worth really tracking down. I know had I done a search for it instead of just happening upon it I would have been pissed.

The choice is yours- just keep in mind its original source was someones VHS tapes so the quality is all over the place.
Posted by Steve Kopian at August 30, 2011