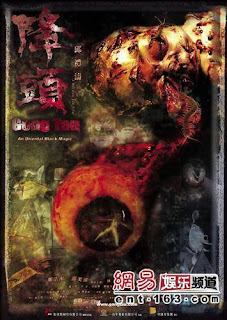 Nasty category three (adults only) horror film about a cop who's life is complicated by some killings that have ties to black magic and which are very much directed at ruining his life.

Bloody, unpleasant and creepy this is one of the better Hong Kong horror films I've seen in the last few months. Give it a couple of extra points for not being about a ghost with long dark hair.It also feels more like a police procedural rather than a horror film for a good portion of it. This is a film that takes the Black Magic films of the 1970's and 80's with centipedes and floating heads and updates them for the current sensibilities.

Then again many of the black magic films were often good and gross, so why mess with them? It doesn't.

I was on edge for a good portion of the film, how can you not be with the nastiness that befalls an infant? Clearly anything is possible. I won't over sell the film by insinuating that its perfect, its not, some of the talking scenes are a bit draggy and the final sequence, which at times is gruesome, maybe goes on a bit too long. Still there is something about the film that makes you sit bolt upright and watch dreading the next nasty turn.

If you like your horror bloody and full of bugs give this film a shot.
Posted by Steve Kopian at August 18, 2011