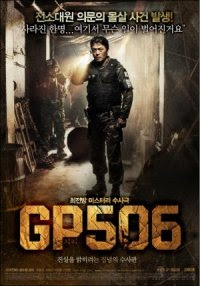 At a guard post along the DMZ something odd has happened. When a military police officer goes to investigate what he finds is far from pretty, an odd disease seems to be spreading.

Military mystery with horror overtones, is an okay film. There is a certain amount of tension generated as the claustrophobic nature of the post and the uncertainty of what is going on really keeps you on pins and needles for a while, but in the end the hows and whys and all don't really warrant the one minute beyond two hour running time. We've been here before and despite a game cast and some novel twists the parts don't equal the whole.

For me as the story played out it reached a point somewhere in the last hour where it started to be less engaging (something the directors similar R-Point did as well) and my patience began to lag. I was invested enough to get to the fade out but in the end it just wasn't anything special, despite some great sequences (which I can't describe lest it give too much plot away- thats the problem the novel things are too few that revealing them would take away any reason to see this film).

Certainly it wasn't worth the effort it took me to watch it (my DVD player was uncooperative and I had to move a couple of times to a less happy location to see it), but it is worth a peek if you have an easier time of it and you have the spoilers kept to a minimum.
Posted by Steve Kopian at August 14, 2011