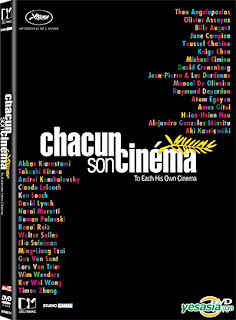 For the anniversary of the Cannes Film Festival, the organizers asked several dozen of the best directors in the world to make a short film about movies. What they turned in makes up this film.

This film is impossible to really describe accurately other than to say it 34 short (3 to 4 minutes) films about the movies and movie going. Covering a variety of topics from comedy and tragedy to documentary this is the a look at how many famous directors see the cinema.

I saw this on a Chinese DVD, which has 33 of the 34 movie done by various directors (only the Cohen Brothers contribution is missing). Most of the films are good, a couple are not bad rather they illicit a "what was that about" reaction and a few are glorious, explaining why the cinema is something so magical. I'm not sure this really is a film for all film goers since the films can be rather oblique, not to mention the ride is bumpy with a poor film sandwiched between a couple winners (or vice versa). I would love to critique each film, but that is dangerous since the films are so short it may reveal too much. I think the best way to see this film (as suggested by a person on IMDB) is to simply watch each film and wait to see what happens. In most cases the director isn't named until the end so you can simply watch each film without any sort of expectation. Granted some films are obvious as to who made them since the directors appear, but many of the others are not so clear.(I was right about half the time and wrong about half)

Definitely worth a look. This is a must see for anyone deeply passionate about the movies and going to them.
Posted by Steve Kopian at August 27, 2011