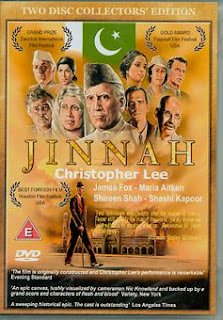 The film was made under threats of all sorts (People tried to have Christopher Lee arrested and deported in Pakistan during filming).

The film has never, to my knowledge, gotten a US release, and it's release elsewhere in the world seems to have been spotty. As for a DVD release, well the UK DVD appears to be out of print and as for any other version it's apparently not readily available.

My viewing of the film came after many years of searching. I had heard of the film from Christopher Lee's bio, but could never find it. Only when I read that Leonard Maltin called it a good film did I start looking again, and only managed to get a copy after a couple of well placed phone calls.

The film tells the story of the Muhammad Ali Jinnah, one of the driving forces for the independence of India and the creation of Pakistan. It's told in a kind of mystical flashback, with Jinnah on his death bed talking to an angel who is to decide where he is to go. With Jinnah's life file lost in cyberspace (they send ill working computers back in time from the future) Jinnah is forced to wander back through his life.

It's not as dumb as it sounds, and other than the first awkward moments in the afterlife the gambit works since it allows us to both see what happened and to allow both a compression of some events and a commentary on others.

The film is an odd mix of emotions, much the way Jinnah has always seemed to me. There is a straightforwardness to it all an almost coldness to how Jinnah carries and conducts himself. And yet there are times when there is deep emotion, The scenes with Jinnah's wife, the scenes of regret and the finale where Jinnah speaks with a little girl on the road all have a kick in them. Sure there is a brave front but there is a depth of feeling underneath.

The performances are quite good.

Christopher Lee is excellent as Jinnah. I can see why he really likes the role. Here is role where he gets to really act. Sure he is rigid and strict, but at the same time he is seething with emotion. All one need to is watch his eyes and you can see the changing emotions filter by. Its a stunning performance and while it probably would never get him an Oscar, it is a performance that is among Lee's best. (For the record I love Lee's gay biker in the film Serial)

Is this one of the best films ever?

No. But it is a damn fine one. How the hell this film has ended up lost to the ages is beyond me. I kind of can believe the talk of the fear of violent protests if the film was shown, but at the same time the film is really so inoffensive as to make me wonder who would be upset by the film.

Definitely a film to keep an eye out for. I have no idea if you'll ever see it, but if you do, be prepared for a great performance by Christopher Lee, it will shake up what you think he can do, especially if you only know him from his genre films.
Posted by Steve Kopian at August 26, 2011