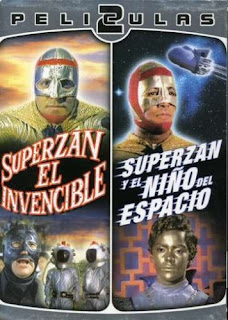 Up until now we've only touched on the Luchadores movies, however thats going to change with a week of films that are probably not going to be your first choices (which I bet would be Santo). Instead some lesser known films that I discovered as I went down the rabbit hole of similar movies. All are worth your time and all can be had for a couple of bucks in bagain bins and used movie dumps which makes them very high in the dollar to enjoyment scale.

Jaw droppingly strange film is the sort of thing that is best sprung on a group of friends who are in a do it yourself Mystery Science Theater 3000 mood. I suspect that had I seen this with subtitles or and English dub this might have made some sense (I doubt it) but then again I might not have had one of the most riveting film going experiences I've had in a long time. Rarely have I ever had the sense that anything- and I mean anything- could happen. Let me give you a taste---

Three aliens come to earth via a variety of borrowed footage.

We see Superzan flying through the air- via an odd mix of faked close ups and what appears to be Superzan being towed behind a plane. he lands, beats up the bad guys then jumps in front of a train-a real train- and wrestles it first to a stop and then sends it rolling backwards.

Superzan then arrives with a princess at a bullfighting ring. A woman sings a song. A masked guy in black sings a song.

Wrestlers show up on motorcycles. the princess greets them before there is a wrestling match.

At this point we're about 20 or 25 minutes in and there is still over an hour to go. I'd go on but frankly if you like weird, strange and really off kilter movies you need to see this. It's a mind bending mind blowing blast.

The film was released on DVD with second Superzan feature, Superzan Y El Nino Espacio which isn't good in on any level but a bad one. This second feature does have some truly mind bending moments,- the plastic toy guns, the capes- but it isn't worth seeing as anything other than a bonus feature to the vastly superior first film.
Posted by Steve Kopian at August 01, 2011