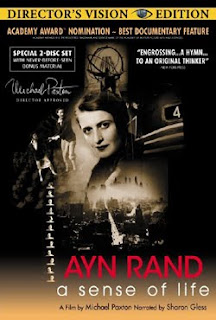 An incredibly comprehensive look at the life of author and philosopher Ayn Rand, A Sense Of Life brings you the story of the woman herself, which is fairly important in understanding her thoughts on life as well.

In presenting her story, you are thrown directly into the paths of her philosophies, which can be modestly described as fiercely uncompromising. Her set of ideals regarding individualism vs collectivism began to be formed at a very early age as she witnessed an incredibly oppressive regime in her native Russia. The film does an excellent job of conveying her feelings towards the scenario in which her upbringing was set, and her desire to leave Russia, which was only heightened by the Communist takeover in late 1917.

Many television appearances by her, including some from The Phil Donahue Show in 1979 and 1980, and an appearance on Tom Snyder's Tomorrow program, also from 1979, are interspersed throughout the film. One of the more interesting TV appearances made by Rand was on an interview show hosted by a pre-"60 Minutes" Mike Wallace in 1959, shortly after the publication of her magnum novel Atlas Shrugged. Bits of these interviews are thrown in throughout A Sense Of Life to punctuate the points being made at the time. In addition to many friends and colleagues that are interviewed about Rand, why not have her talk about herself as well? For someone who did not have English as her first language, it is amazing how articulately she can get her erudite points across.

Her personal life is well documented thru the film as well, with a detailed examination of her early living in America, her struggles to get started, and the fact that Hollywood director Cecil B. DeMille can be credited directly and indirectly with getting her a job in the first place and finding her ideal man, who became her husband.

Occasionally the documentary comes across a little heavy-handed, with a slight bit of the feeling that the subject was the greatest human ever to walk the earth. But for the most part, it is a genuinely endearing look at the life of someone who truly was an incredibly remarkable person, and who wound up achieving all that she could in life, which was basically the point of her philosophy of objectivism. She said herself that her novels were partially autobiographical, as while the characters may have been made up, the traits that they displayed, and the ideals they clung so fiercely to, were very real. A good documentary leaves you interested in wanting to know more about its subject, whether you are or aren't familiar with them beforehand. I'm going to grab my copy of The Romantic Manifesto off my bookshelves and reacquaint myself with the Rand philosophies.
Posted by Ken Fries at August 06, 2011