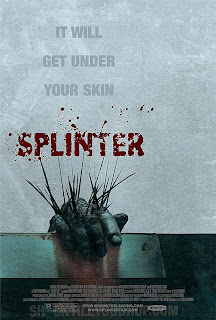 One of the best horror films I've seen in a while transcends its cliché plot and makes it into something skin crawling. The premise is that a couple goes camping. they get kidnapped by another couple. When they are driving away they hit something in the road, which is still moving even when dead. Fleeing they end up at a gas station when their car over heats, unfortunately the thing from the road is there too.

Creepy, bloody, un-nerving in the way things moving in the wrong way are, this is a small scale film with no explanations and only one desire to make you feel very uneasy. I kept saying "oh thats just wrong" over and over again.

Sure the characters and the situations are clichéd but they spice it up enough to make it interesting. Also working to its advantage is the fact that the film is stripped down as far as you can strip it with no extra characters, no explanations, nothing out side of what is needed to tell the story.

Who needs an army of zombies or chainsaw wielding maniacs? this is a film thats worth a box of popcorn and a bottle of soda... and best of all repeat viewings
Posted by Steve Kopian at August 15, 2011