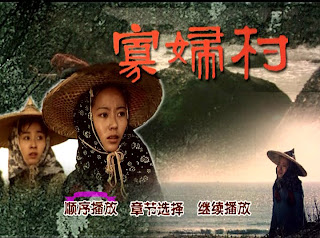 Saturday marked a year and a half of Unseen Films tossing the titles of films you may never have heard of your way.

Its been a blast. It’s been exhausting. Its been a never ending battle for truth justice and good movies.

Don’t worry I’m not going to churn out one of those long self serving pieces. Rather I’m going to use this as a means of discussing this weeks theme- films that are really really off the beaten path. These are films that you may never find even if you really try to track them down. Okay things like tomorrow’s Nemo you can find as an import, but the others are just off the radar.

As I did last year at about this time I’m going to talk about one of the films that pointed me toward starting this website. Last year was Tree in the Desert, this year is another Chinese film called Village of Widows.

This is set in a village of fishermen wives can't stay with (or sleep with their husbands) because of the dangers of the lifestyle for three years. When women succumbs and sleep with their own or the husbands of others, tragedy often follow...or something like that at least according to the opening narration. The film traces just such a tragic tale.

Beautiful (and I do mean it) looking film that looks more like one of the classics of Russian cinema then a film set in a Chinese fishing village. The plot, a tragic romance came through as muddled due to poor and small English subtitles on the VCD.

Its a good film which I thought was not the sort of thing I needed to revisit when I first saw it. The trouble is this is one of those haunting films that you don't think much of when you first see it, only to find that you can't shake it. It's been several years since I've seen the film and yet some of the images just hang in my memory.

Give the film a couple extra points for hanging around.

Is this a great film? probably not, but it is a haunting film. Frankly this is a film that I've probably thought about more than some of the other better and more memorable films that I've seen and reviewed here at Unseen Films (Case in point any number of this years Tribeca films).

If you can find yourself a copy, I found mine in a VCD dump bin for a dollar, I recommend giving it ago. No it won't be the best thing you ever saw, but it will be something that you remember seeing years after you do.
Posted by Steve Kopian at August 22, 2011