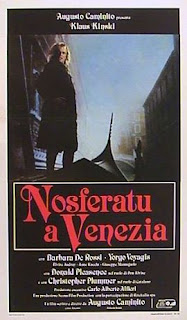 Christopher Plummer goes to Venice to investigate the last known appearance of Nosferatu during the Carnival of 1786.Plummer seems to think that the vampire is searching for a means to put an end to his torment and actually be dead. He stays with a family who legend says, has the vampire trapped in a tomb in the basement. After a séance "the vampire" appears and then it becomes a question of how do you put the evil back into the box.

Thats a poor description for a very moody, very good rethink of the vampire legend. In theory this is a modern day sequel to Werner Herzog's remake of the FW Murnau's silent original. However other than the fact that Klaus Kinski plays the vampire the films are pretty much separate films. Here the vampire is a force outside of nature, he goes out during the day, religious objects don't affect him and he has powers beyond those of normal vampires. To be honest this film's idea of vampires and their creation is very different than what is considered "normal" vampire lore.

This is a film thats a bit more form over content, but its still weaves a magical spell. Its a very atmospheric haunted Venice story where mood and feeling is all. Its a film designed to make you feel creepy and uneasy and not so much scary in "the jump and scream variety". It helps that the film rethinks what a vampire is. Going back to folklore where things other than a bite on the neck was required to turn someone undead, this film keeps you off balance since you can't be sure what is real with in the film's world.

Adding a great deal to the film are the performances of the excellent cast. Christopher Plummer's vampire hunter is a wonderful man of science who's pronouncements give a weight to the proceedings that would me missing in lesser hands. We believe in whats going on, because he does. Even in the early scenes when there is some doubt as to whats real and what isn't Plummer's intensity keeps things on track. Klaus Kinski as the vampire is a brooding, sad, sexual menace that says very little but wanders through his scenes with a power and intensity lacking in most vampires. Here is an ages old world weary soul who is forced to play peoples stupid games but who really just wants to be loved and most of all to die.

The cinematography of this film is extraordinary. Venice is a character in every shot. You get a sense of place and of dread with every picture. This is one of the most beautiful films I've seen, and its fog shrouded vistas of Venice in the morning deserve to be hung on the wall.

This is an amazing film, more creepy than scary, but one that is none the less haunting. This is a lost treasure for those who can appreciate horror films as being more than just the traditional sort.
Posted by Steve Kopian at August 19, 2011