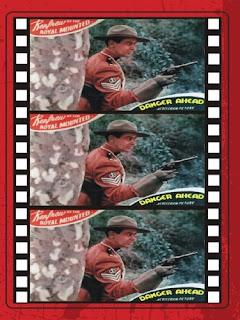 We're on the down slide of Renfrew films with only two more left after today.

The plot of this film this time out has a shipment of gold going missing. What we know, and Renfrew has to figure out is that the shipment was high jacked by employees of the trucking company who duped the young man driving the shipment so they could switch the load. They then put acid on the break lines when they knew the drive would take him over a treacherous road.

This time out Renfrew is "helped" by his bosses daughter who is just returned from college where she studied criminology and psychology. No one is particularly thrilled and they wish she would just go into the kitchen and make them a green apple pie.

Breezy crime story moves a long at a fast clip and it's over before you know it. To be certain it plays a little blandly when you watch it with all the other Renfrews (I did a marathon to do this series) but taken on it's own terms good little thriller.

I should warn any feminists who go to see this Renfrew is a HUGE male chauvinist pig. He will make any rational persons skin crawl with his a woman's place is in the kitchen attitude.
Posted by Steve Kopian at August 24, 2011