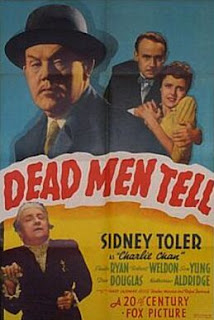 I had thought I had consciously seen all of the Charlie Chans that exist. I thought that I had seen Dead Men Tell but hadn't seen the ending because when I had taped it the end was missing. Boy was I shocked to discover that I had no memory of the film what so ever.

The plot of the film has a ship waiting to set off on a treasure hunt. The granddaughter of a pirate was going to use her grandfather's map to recover the 66 million dollar treasure. Sadly the trip was being delayed by some one trying to steal the map.

Charlie Chan comes into the story on a search for his number two son who has chucked college in the hope of stowing away on the trip. Chan meets the old lady who is in charge of the voyage and she imparts some secrets to him. He then uses that info to help him catch her killer after she is frightened to death.

Ship board (and fog shrouded dock) mystery is atypical Chan. More intent to be a real thriller then just a mystery the film is full of dark and shadowy locations. There is also an abundance of great characters (including a nice turn for George Reeves). The sort of film that is a perfect pair for the similar in feel Charlie Chan in The Wax Museum which preceded it.

I really like this film a great deal, and had the film not overly relied on the use of a dumb pirate costume the film would have been among the very best in the entire series (lets face it after the second appearance the suit's use if down right stupid.

Allowing for that this is a great film and worth seeing when ever you get a chance.
Posted by Steve Kopian at August 29, 2011