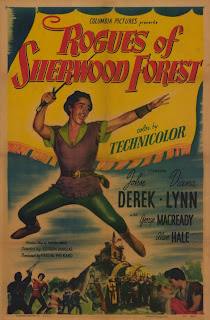 And now we're going to do a week of lesser known Robin Hood films. Some of these titles, like today's, come from the release of films that Columbia put out in the wake of last years Robin Hood film with Russell Crowe. the others, are from elsewhere.

This film marks the third film appearance of Alan Hale as Little John. He had previously played the part opposite Douglas Fairbanks in 1922 and Errol Flynn in 1939. Here he plays the same role opposite John Derek... however Derek isn't Robin Hood but his son.

The plot of the film takes place several years after King Richard's death. John is in control of the country but he is smarting from the rules and "democracy" left over from his brother's day. he wants to tighten control, but first he has to get rid of some enemies and raise and army. He first tries to kill Robin in a fixed jousting match but he turns it on the villain and kills the assassin. Stinging, John tries to hire mercenaries but can't raise the cash he raises takes to unheard of levels. When the people protest John uses forces and Robin steps in. He's captured, but escapes with the aide of a pretty maiden. From there it's your typical Robin Hood adventure as Robin gets the band back together...or rather his father's band back together.

Amusing but unremarkable adventure tale is a perfect little time killer. Its typical Hollywood nonsense done well. Actually it's good enough that you wish it was better, that perhaps they hadn't been so by the numbers with some of it. Though to be honest the real problem is John Derek as the younger Robin Hood. While not bad, he just lacks any of the charisma that most of the other people who've played Robin.

Still the film is a great deal of fun. It's the sort of thing that is perfect for a rainy afternoon. Actually with a carefully chosen second or third feature it would be part of an excellent day in the home theater.
Posted by Steve Kopian at August 08, 2011