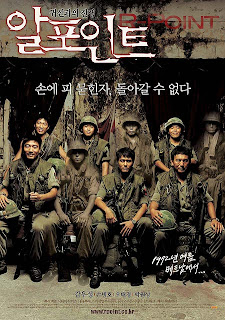 This was being sold as a Korean version of Apocalypse Now. Its not. Other than the plot device of investigating mysterious radio signals there is no similarities at all. Do not believe the hype.

The plot concerns a group of soldiers sent to R-Point to investigate a group radio signals from a group of supposedly dead men. Once they cross the line into the area all sorts of strange things begin to happen and they slowly begin to dwindle in number.

Yes, you've probably seen it before in other films, you know the drill a group of men cut off in a strange place where they are hunted by a seemingly supernatural force. Recent films such as the Bunker, or Deathwatch cover similar territory to varying degrees of success.

For most of the running time R-Point works, as a good but not great thriller. There is a slowly building sense of dread as it goes on that thankfully never becomes overwhelming. It's not perfect as most of the men blend together and you really have no idea who is who.

The real problem is that around an hour or so in the film starts to not make sense. Events become disjointed and there are some turns that seems out of left field. Granted this is a film that asks you to pay attention as little things early on show up later or give clues to whats going on, so if you look away you may feel lost. I did look away and did feel lost.

I also have reservations about the reasons for events toward the end, they don't seem natural, I suspect this is due to the director attempting to add more weight to the story than a straight horror film could carry. I think the attempts at allegory weaken the film and prevent it from being either a horror film or allegory.

Still I do recommend the film for those people who want to see something creepy but not too scary, and who don't mind it doesn't completely work to the end.
Posted by Steve Kopian at August 13, 2011