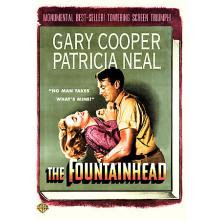 "My reward, my purpose, my LIFE, is the work itself. My work, done MY WAY. Nothing else matters to me."

While there is a romance going on here, this film is chiefly about one man's uncompromising integrity in the face of a world which seems to demand compliance, acceptance, and self-sacrifice. Howard Roark, the protagonist of the story (played with chiseled hardness by Gary Cooper), is a man who refuses to take the easy way out. Many times in the course of the film he is faced with choices that a lesser man would have easily gone the opposite, easier way. Faced often with the prospect of giving up his ideals, Roark never once compromises them, instead insisting on remaining true to himself and his own ideals, many time to the utter bewilderment of those around him.

Based on the novel of the same title by Ayn Rand, she also wrote the screenplay for this film, and so the integrity in question onscreen is upheld offscreen as well. The story in The Fountainhead contains many of the ideals of objectivism, the philosophy Rand developed about what man can achieve (amongst many other things). Roark is an architect who demands his buildings be built his way, no changes to his designs. By remaining uncompromising, and never giving in, he goes thru the full spectrum of success (and the lack of) over the course of the story. Watching Cooper stoically portray Roark, while it sometimes seems like an underperformance, is probably just what the character warrants.

A fast-paced film plot-wise, the biggest complaint there could be with it is the soundtrack. It's a glorious old film soundtrack, but the music swells so often at times it seems to be overdoing it quite a bit, occasionally seeming more trite than triumphant. Often it escalates to punctuate events that really aren't worthy of such emotionally powerful music. It becomes a bit of a distraction at times, but if this is the biggest complaint about the film, you realize just how good the picture is. It does get a little preachy and heavy-handed towards the end, and most characters fall hard on either side of the fence. They are either VERY pro individualism or VERY against it; no room for middle ground here. The characters represent EXTREME ends of the argument. But again, these are basically minor complaints, and the film is trying to make a point, so the polar opposites are the best way to convey that.

The Fountainhead is a picture worth watching whether or not you are a fan of Rand and/or her philosophy. It does give you some things to think about, in addition to providing entertainment for nearly 2 hours. And like most good things in life, you will get more out of it the more you are willing to put into it.
Posted by Ken Fries at August 07, 2011