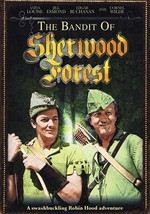 Another son of Robin Hood tale (see yesterday's film for another), this time out Robin is still alive, so we get some father and son action.

Set after the death of King John. William of Pembroke is acting as regent. Robin has called together all his men to warn them that William is planning something evil at an upcoming meeting of Barons. When Robin arrives he finds that William is taking steps to take control of the country. He repeals the Mangna Carta as his first step. Robin protests and is banished. He instead takes to the country and send for his son.

When the King is seized and his mother and a maid flee into the country side they are found by the younger Robin who brings them to his dad. Not long after that word reaches them that William plans to kill the boy and take the throne. This sets in motion the events of the final hour of the film.

Great looking Hollywood hokum is a great example of the Technicolor films of the period. It's pure Hollywood contrivance but at the same time it's fun. To be certain it doesn't match up with some of the classic swashbucklers but it's still a great time.

The fact that the film over comes some of the Hollywood cliches is due in large part to the performances. Everyone sells their roles to the point you over look the plot flaws. Chief among the joys is Cornel Wilde, who's bravado and sheer physical presence explains why he was he was a start for 50 years.

Definitely work a look. It's out on DVD from Columbia as one of the films released in the wake of Russell Crowe's Robin Hood last year.
Posted by Steve Kopian at August 09, 2011