Latinbeat: All of Your Dead Ones plus a few updates 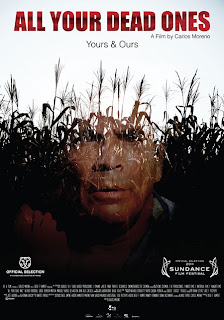 Tonight I went to see All of Your Dead Ones at Latinbeat at Lincoln Center. This is a film that got rightly noticed at the Sundance and Rotterdam Film Festivals.

The plot has our hero going out to tend to his fields one Sunday morning. Working his way along a fence with a weedwacker he comes to a big hole in the wire and a path way large enough for a truck, leading back into his corn. Following the path he is horrified to discover that in a clearing are fifty bodies stacked in a pile. He makes his way into town but the mayor is too busy with the election, it's election day, to pay attention, and the police are kind of disinterested. However as he's talking to a radio DJ the police decide to see what he's talking about. When they arrive the question becomes not so much who did it, but how can we cover it up.

This is a darkly funny tale that is the sort of thing that makes you squirm as you're laughing. No one seems to care abut what happened except our hero and his family. This is a film that is set in a world where no one really cares about anything other than their own butts, and the lengths that people will go to cover them is both horrifying and amusing.

One of the more telling things, and something that provides some of the biggest laughs, is the enormity of the situation. No one really understands how many people are dead until they see the pile. The number of people dead is the thing that gives the film it's zing as it were. as a writer at Twitch Film said, if it was only one or two people the film would play out as a small personal tragedy, but seeing so many bodies raises the stakes. It makes you wonder just what the hell is going on. Its the punchline to a sick joke...and yet it's not showing us the crimes of some political entity (The mayor instantly calls a neighboring mayor to ask why the other mayor dumped his bodies in this place. The implication is this happens all the time.)

Not long before the film reached it's conclusion I was thinking that, I really liked the film, and that it was more an intellectual film than an emotional one. Yes, there was tension and uneasiness as the events unfolded, I mean how could you not worry about the fate of our hero?

Then something happened. As the film ended, truly ended, just before the curtain call, something happens, an innocuous shot or two and suddenly I was sitting there feeling like I had been gut punched.

What the hell happened?

I'm still not sure, but something did and I stopped caring about the film as an intellectual exercise and instead was pained by the death of the nameless 50... and for anyone who dies in stupid political violence. As the film moved toward the credits I was simply sitting there staring at the screen.

Talk about a kick in the pants.

I suspect that this will be getting a wider release in the US so do keep an eye out for it.

(A technical aside- the subtitles on the print tonight seemed to be incomplete. Somethings were subtitled and somethings weren't. There was also a couple of misspellings, which I hope will be fixed.)

A couple of updates.

God Bless Ozzy Osborne is getting screenings the 24th and 29th as a Fathom Events. If you like Ozzy or Sabbath, go. The film is a blast and one of the highlights of Tribeca.

The flier is out for Lincoln Center for September and October. A couple of quick notes.

Labor Day weekend they are running trilogies. They will be doing The Godfather on the 5th, Back to the Future on the 4th, and Max Max on the 3rd. They will also be doing the Three Colors trilogy of Krzysztof Kieslowski and the Koker Trilogy of Abbas Kiarostami on two days each.

There is a series of Tuesday Weld films, a series of popular Chinese films (some of which played the NYAFF), recent Polish films and they announced that the Scary Movies series runs the Thursday before through Halloween.

They also list the schedule for the Nikkatsu retrospective. It's being done approximately chronologically with the more recent films toward the end (overlapping Comicon, which complicates our going greatly)

It appears Criterion is doing an edition of Godzilla. Depending on what the extras are I may get a third super special edition (to add to the American and BFI ones)

I need to mention that the longest gestating suggested film, Fists in the Pocket has finally been watched and will be reviewed during our week of Criterions in late Fall. (as always you can email us with suggestions- which we will get to- promise- just watch the next couple of weeks and you'll see them starting to appear)
---

Lastly I've gotten a couple of notes recently asking me to put films on to torrent so they could be downloaded.

The short answer is no.

A longer answer is that even allowing that I was set up to be able to do that, I'm not, recent events concerning people a couple of degrees away from me strongly suggest it's not advisable.

If you want to see something and the sources in the sidebar don't provide the film, either leave a comment asking where to get it or email us and we'll try to help you.