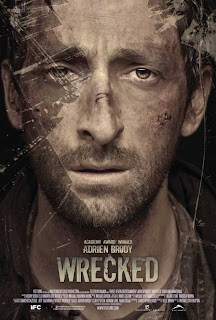 The premise of the film is simple, a man, played by Adrian Brody comes to consciousness while seated in a car that is sitting at the bottom of a ravine. Obviously there as been an accident, he’s injured and trapped, the man in the back seat is dead and the driver is barely visible in the distance having been ejected from the wreck. What happens, both in reality and in his mind, is the movie.

The lack of dialog and the shifting nature of reality coupled with a story which is not a rousing tale of survival is going to make this film a tough sell. Don’t get me wrong, it’s a good film with one great card in it’s hand (which I’ll get to), but it’s a film that refuses, utterly and completely to do anything other than go it’s own way. I kept watching it waiting for this to happen or that to happen, but thothing I expected ever did. Even when I thought something would kick it in a certain direction the rug would be pulled out from under me. As for absolute and complete answers- look else where because they aren’t there.

It’s a good unique film- but it’s refusal to be anything other than what it is will make it impossible to sell. I completely understand why it only had a token theatrical release.

This doesn’t mean you shouldn’t see it, you should because not only is it unique, but also because it has one hell of a performance by Adrian Brody. It’s the sort of film that were it a bigger budget, more mainstream film would put him in the running for an Oscar. Thank god he has one because his turn here proves that his win for the Pianist was not a fluke (As some of my friends have said). It’s that good.

I don’t know if you’ll love Wrecked. I know I don’t but at the same time it’s a film that is good enough and unique enough to make it must see viewing for people who really want to stay out of the mainstream sewer filled with giant robots and bang bang shoot em ups.

On DVD and pay perview on cable.
Posted by Steve Kopian at August 31, 2011