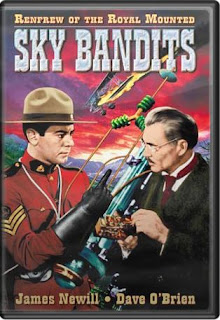 The plot concerns a gang of hijackers shooting down gold planes in the great wilds of Canada. Renfrew and his buddy Constable Kelly have been assigned to try and find out what is happening to the planes which are disappearing with no trace. Renfrew's boss suspects that the pilots are stealing the shipments and flying them over the border. Renfrew thinks that something more sinister is transpiring. Renfrew is of course right and soon he has locked horns with the gang of bad guys who have moved from using bullets to bring the planes down, to using a ray that burns out the plane's engine.

This is grand Saturday afternoon style adventure. Nominally a western without the cowboys this film is an action packed romp from start to finish as horses are often used to get from place to place. Actually the western connection is even closer with this being the second remake of Tim McCoys Ghost Patrol (Its also far superior to that earlier film).

This is a great movie with many things going for it.I like that everyone in this film is a character of some sort and manages to make an impression on you as being an individual at some point in the film. The wise cracks are funny. The action is well done. Its also great to see Dwight Frye playing the extremely tightly wound inventor of the engine stopping ray.

If the film has any real flaw is that Renfrew bursts into song about three times too often. The songs actually aren't bad, they are good in a corny sort of way, they just stop the action from moving for the two or three minutes that they are sung. Keep the remote handy and you'll be okay.

Definitely worth a bag of popcorn and an hour of your time
Posted by Steve Kopian at August 31, 2011