Gospel According to Phillip K DIck (2001) 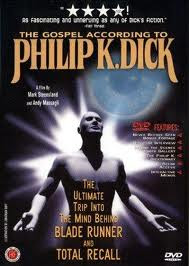 Rambling chatter about Philip K Dick, best known for the novels that became Minority Report, Blade Runner and Screamers. The chatter is loosely grouped together by subject but it drifts back and forth through many subjects. Its interesting to listen to but a bit tough to watch.

The trouble is that this is nothing more than interviews with people who knew Dick talking, inter-cut with some audio interview footage spiced up with cartoon of Dick at the typewriter. There is almost nothing other than the interviews themselves, no photos, some fleeting shots of printed material and of the outside of Dick's house. There is no narration, no attempt to explain any of the works he wrote or of his life, its simply remembrances that will mean nothing to anyone who has never read any of his books or, more importantly, never heard any of the stories of the man. My Dad who watched this with me was totally bewildered because he didn't know about Dick's life.

If you want an introduction to Philip K Dick and his work go somewhere else, this will put you off him forever. If you already know the man you may want to rent this, and then do something else while listening to it since its a dull thing to watch, but an interesting thing to listen to since the stories told are quite funny assuming you have some context to understand the craziness of them.
Posted by Steve Kopian at August 21, 2011