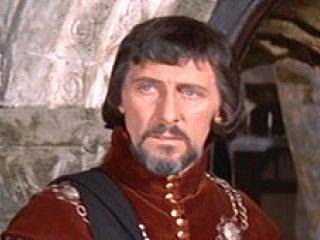 Big screen color Robin Hood adventure with Richard Greene picking up where the Robin Hood TV series left off. It's of interest for other reasons as well, first it was produced by Hammer Films. Next it has Peter Cushing as the Sheriff of Nottingham, Nigel Green as Little John and in a small part Oliver Reed (giving possibly the worst performance of his career).Lastly it was directed by the under rated Terrence Fisher.

It's a good but kind of off beat Robin Hood story. On some level the film is big screen version of the TV series but with several changes in the cast, but on other levels its own little film. There is some amped up violence and more than the hint of sexuality (there are bare shoulders and the women look stunning).

It's a large scale film that gets bonus points for clearly being shot on location in the forests of England.

The plot has the Sheriff of Nottingham trying to seize the estate of a crusader killed in the Holy Land. The whole affair hinges on possession of an emblem brought back by an agent of the dead man. There is also a plot to kill the Archbishop of Canterbury.

The film is entertaining, but a bit static. The pace is slow and while director Fisher manages to beautifully compose the widescreen shots, the images often seem more like still photos rather than moving ones.

I like the film but don't love it. In all honesty the film is interesting more on an intellectual level rather than an emotional one (I find the cast entertaining and the film does look great). That said it's good enough to give it s shot should you run across it on TV. I just can't see paying big bucks to buy it on DVD or Rent it from Blockbuster.

(It should be noted that according to IMDB the original opening of the film has disappeared since it's release. The opening was set on the crusades and explains what the injured man is doing racing across England. On some level the loss is a blow to the film since you're a good way into the film before you have any idea what is going on.)
Posted by Steve Kopian at August 10, 2011