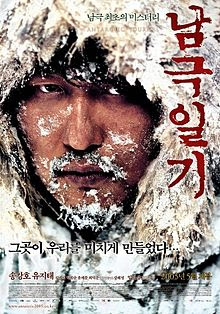 Six men set out to reach the point of inaccessibility in Antarctica. They have 60 days of sun light to travel to the most remote place on the continent by foot, something that has only happened one time before. Along the way they find the journal from a 1922 British expedition that appears to have gone horribly wrong. Soon things begin to mirror the earlier expedition.

This is a frustrating film.

Beautifully made and breathtakingly shot, with New Zealand doubling for the bottom of the world, this is a film that makes you shiver just from looking at each frame. As polar films go this is one of the best looking ones I've ever seen. The performances are all first rate and you sympathize with the men and their plight.

The trouble is that the film's plot doesn't quite work. The mystery of why things go wrong is never fully explained satisfactorily. The film seems to want to blame both the the psychological break down of the men on what happens and at the same time wants to subscribe some form of supernatural explanation. Its possible to to have it both ways with a hint of the supernatural affecting the men, but thats not the case here. (SPOILERS) Here we have the journal which seems to kick off some events that only we see coupling with some things the men experience which are then sort of discounted by the denouncement at the end. Why are we shown hints of monsters that never materialize? I don't have a clue. It reminded me very much of the supernatural war film R-Point which has an ending that seems to come out of left field. In both cases one is left at the end with a film that never delivers on the promise made when the films started. (END SPOILER)

Worth a rental or a visit on cable, but this isn't something thats going to be in your need to see repeatedly collection.
Posted by Steve Kopian at August 17, 2011