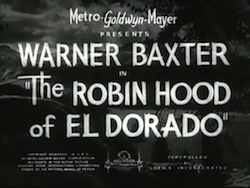 To close out this week of Robin Hood films I’m going to talk about a film that is a Robin Hood film in name only. The film is called Robin Hood of Eldorado and it tells the fictionalized story of Joaquin Murrieta a bandit/ patriot in California around the time of the gold rush.

The plot of the film has Warner Baxter (an actor about 20 years too old) playing the humble Murrieta. He is content to go along with life. When gold is discovered he makes a claim and sets up a successful farm and mining operation. When some bad guys try to take his claim they rape and kill his wife and Murrieta is set on the path of an outlaw in his quest for vengeance. Talked out of his murderous course by a friend he instead goes to stay with his brother, however his brother is lynched and he is whipped. This sets him on a course that he never recovers from.

The story of Murrieta is the stuff of legends and the character has been the subject off several films and books. The reality of the situation is still subject of debate with some people seeing him as a hero and others as a villain. My awareness of Murrieta started with this film and frankly based upon it I don’t see why he would be considered a hero. Sure he was beaten and abused by life and I can feel for him, but at the same time I don’t see why he would considered a hero since he seemed to be robbing and killing pretty much everyone.(The Wikipedia entry is here)

History aside how is the movie?

It’s much darker than I expected. Frankly I picked up the film purely because of the title. I expected a light(er) story that some how mirrored the English legend. Instead I got a brooding tale of a man abused by life who fought back with a gun. It’s not a bad film, it’s just a rather somber film about an outlaw.

Baxter is good at Murrieta, if a tad too old (Baxter was 47 when he played Murrieta who was 23 when he is believed to have died). Baxter makes him a haunted victim whose turn to violence is understandable.

If there is a problem it’s that the film is kind of soapy and Hollywood-esque. Blame the fancy costumes and the fact that there were at least 8 writers including director William Wellman.

It’s a good film. Definitely worth a look for those who want a different sort of western.

Currently in the rotation on Turner Classic
Posted by Steve Kopian at August 12, 2011