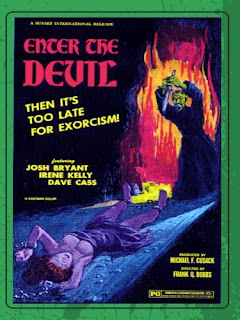 A man driving in the desert has his tire shot out. He thinks it's just a blow out and when he finds his spare is also flat he decides to walk to get help. Getting picked up by a fast moving pick up truck the man is soon reported missing. What follows is an investigation into the disappearance of the man and the uncovering of a strange cult near the US border with Mexico.

Minor classic and unjustly forgotten horror film seems to have disappeared into the mists of time. I don't ever remember seeing or hearing of this film until I ran across it in the Sinister Cinema catalog. I'm guessing that the film disappeared into the void since it probably had small distribution and was made about the same time as other western set horror films like Race with Devil, Devils Rain and others of that type. It's a shame since the film is actually quite creepy and even scary.

What makes this film work are a couple of key factors, first the visual sense. There is something about the way the shots are composed that creates a good sense of dread. The Film manages to take run of the mill horror film events and turn them into something else. Watch the opening sequence. The idea of a man driving in the desert can be boring. However we are drawn in to the proceedings almost instantly. We are there. As the sequence proceeds and the rock collector is picked up, we already have a sense of unease before he gets into the truck. It helps that we never see the driver and until the truck pulls away, we only fleetingly see the gun that shot out the car tire. We know that the man will not becoming back, a feeling reinforced by the fade to the torch lit procession of robed figures. Its eerie and the film is barely five minutes old.

The second thing that works in favor of the film is that it doesn't behave as most other films of this sort. The cliché's are not really there. Who and what is going on isn't ever really explained, there is no twist ending, characters come and go in ways you don't expect and the film sticks pretty close to reality, we don't get overwhelming supernatural forces at work, its all very real in a way most horror films never are.

You'll forgive the lack of details about the story, but as with most films this is a better film to see than read about.

If you can, see about tracking this film down. Its not readily available and it seems that the only ones carrying it are companies specializing in obscure films (Sinister, Something Weird, etc.). Also be forgiving since any prints out there seem to be scratched.