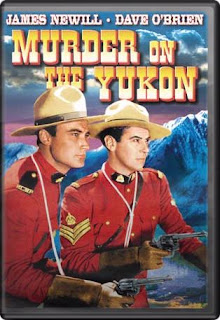 While on a semi-vacation looking for the source of counterfeit money Renfrew and Kelly discover the body of a miner in a beached canoe. The murderer had set the canoe adrift hoping that it would go over the falls hiding his misdeed, however circumstance conspired against him and soon he, and his ring of counterfeiters have to deal with the mounties looking into the murder.

This is a good solid movie. Granted it isn't much of a mystery since you know who the bad guys are from the outset, but it doesn't really matter much because the point of these films is the action and the smart mouth exchanges between Renfrew and Kelly. These are two friends who pick on each other mercilessly and there verbal sparring is always very witty and several shades cleverer than most dialog you find in these programmers. I've seen all of the Renfrew movies now and it amazes me at how much the two genuinely seem to like and care for each other, even when they are cutting each other down. Its very real.

The films action is very good with several nice fights and couple of chases. Say what you will about the series the fact that the movies take place primarily outdoors in settings you haven't seen a thousand times before is another plus. The lack of studio settings adds a nice edge to the film and makes it seem less by the numbers.

Yes, there are songs but they are not intrusive and are over almost before they start. They are also used as a way for Renfrew to pick on Kelly.

Over all this is a good solid entry in the series and definitely worth checking out if you run across it.
Posted by Steve Kopian at August 17, 2011