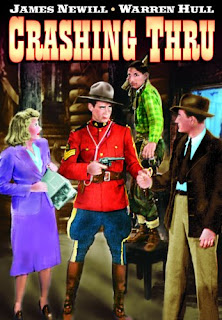 Renfrew of the Mounties and Constable Kelly are on a riverboat in the Canadian wilderness. As they attempt to woo a young lady they meet they are unaware of plans to rob the boat of a shipment of gold secreted below deck. Worse the young lady they are attempting to make time with is involved with the plot. The Mounties are tricked into being locked in the hold of the ship and the gold is stolen. Renfrew and Kelly then have to race to recover the gold before they appear to be too big a pair of idiots.

This is a damn fine B-movie. It moves like the wind and has more than its share of double and triple crosses, not to mention plot lines. Frankly many bigger budgeted films don't have this much action and detailed plotting. This is a movie that never stops from the minute it starts until the very end. Its a nifty little action adventure film. I really like this movie a great deal. Amazingly I even like the songs in this movie. Sue me, I think they actually work well, since they are integrated into the plot.

This is one of those movies you'll want to make an effort to keep an eye out for, since its a great way to spend an hour of your time.

Alpha video and Sinister among others have it available.
Posted by Steve Kopian at August 03, 2011