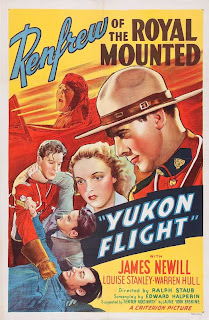 Once more to the frozen North...

This is a good solid program adventure film. It is not a particularly amazing one. It's possibly the blandest of all of the Renfrew of the Mounties films. It's the one film that kind of doesn't stand out as a Renfrew film (other than the singing.) Its the one film of the bunch that had I seen it first I may not have gone on to any of the others. This isn't to say it's bad, rather it's just to say it bland.

The plot of the film has some bad guys tying up one of their own and sending him aloft with a limited amount of fuel. The plan is that he'll crash and save them the trouble of killing him, and also divert suspicion away from them. Unfortunately for the baddies their victim begins to call for help on the radio and they are forced to jam the signal which brings them to the attention of the Mounties.

From their the plot gets complicated as it's revealed the bad guys are stealing the gold they are shipping and trying to cover up the thefts. A replacement pilot also arrives, a friend of Renfrew's, who is also not completely on the up and up.

How Renfrew tries to find the "missing" pilot, romances a girl and keeps his friend out of harms way is the film.

While enjoyable on it's own terms, the film is nowhere near as exciting as most of the other Renfrew films. Its a film that doesn't quite have the flair and the visual punch of some of the other entries. In all honesty it's a film that would have worked with almost any other characters in the leads since other than the uniforms the film could have been a western or even a simple crime drama with planes.

I like the film, but where I usually want to keep watching Renfrew movies once I finish one, with this one I just turned off the TV and went to bed, feeling done for the evening.

Definitely worth picking up since it is a good film. It's just the least representative of the Renfrews (even if it does have one hell of a cool fishing pole fight.)
Posted by Steve Kopian at August 10, 2011