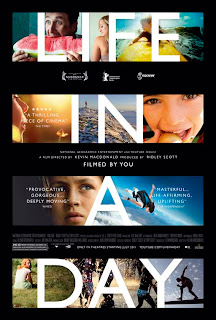 This is one of my favorite films of the year.

It's not perfect, it's uneven, but when this baby sings there is few things better than it.

The result of a a project to document July 24th 2010 via the web, specifically You Tube. The producers, who include Tony and Ridley Scott, went through 4500 hours of footage from 192 countries to piece together life on earth in one day.

I don't know what to say. The marriage of image and music is fantastic. When this film works it will bring you to tears and put a lump in your throat. Its the moon, and animals, and people waking up and cooking and working and living and sleeping and trying to deal with life... It's like meeting ten thousand great people all at once.

Some of it is happy, some is sad...there is triumph and tragedy...

You really need to see this in a theater if possible. You need to have the world fall away and not to have logos in the corner of the screen or commercials or distractions...you just need to see this movie and focus on it.

Half an hour in I wanted to stop the film because I wanted to know more about everything I was seeing. I guess that's what the DVD is for.

Seriously if this playing by you go see it. I found out it was playing in driving distance because I got an email from National Geographic who produced it. Sadly there was only three of us in the screening...which is a crime.

Go see this film on a big screen and be overwhelmed.

As I said one of my favorites of the year.
Posted by Steve Kopian at August 07, 2011