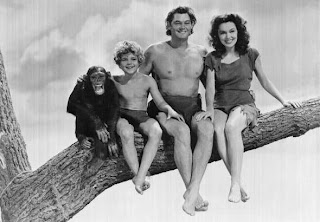 Made for Turner Classic movies and packaged in with the Warner Brothers DVD release of the first six MGM Tarzan movies this is an over view of the character of Tarzan from his creation through to the production of Tarzan's New York Adventure.

It's a very informative look at the world's favorite jungle man as seen in 6 MGM movies. This is your typical Warner classic documentary with lots of talking heads (Rudy Behlmer, Robert Osborne, Johnny Weissmuller Jr not to mention Edgar Rice Burroughs experts) plus tons of stills and clips. Its a really nice over view of the MGM series that reveals many new stories and corrects many falsely held ones (for example Burroughs actually liked the films, I had always heard otherwise).It's a good amount of information told in an entertaining way.

Before seeing this film I was never a huge fan of this bunch of Tarzan films, I found them fun, but somewhat too silly. However seeing this documentary piqued my interest enough to go back and re-watch the films (I was dying to see if I notice the fake elephant ears in the films themselves).

If there is a flaw to this documentary its that the film runs out of steam towards the end. For what ever reason the 80 minute running time is too long for whats up on screen. That minor complaint aside this if absolutely worth seeing, especially if you've ever seen any of the films, or wondered about whether Maureen O'Sullivan was the one doing the nude swim scene.
Posted by Steve Kopian at February 08, 2012