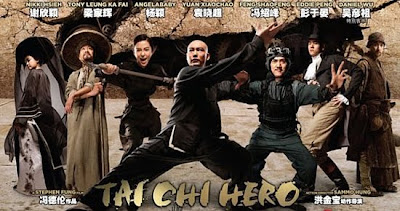 TAI CHI HERO is the sequel to TAI CHI ZERO a frenetic martial arts film which got it's US release back in October. While shopping in Chinatown I came across an import DVD and I picked it up.

The story picks up not long after the first film with the wedding of Lu Chan and Yunian. She is marrying him out of obligation not love and while she will now teach him kung fu she will not sleep with him. At the wedding her long lost older brother arrives and sets about re-establishing himself into the village. This causes trouble, as does the machinations of Fang who wants revenge for the defeat in the previous film.

Less frenetic than the first film, the film instead is very plot heavy- or st least the first half is where there is much more talk than action. This is fine with me since it allows for character development in ways that seemed missing from the earlier film. For my money it's this character building that is what makes this film so much better than the earlier film.

Once we get to the half way point the film shifts gears and things begin to slide as the last45 minutes are largely given over to two massive action set pieces, first as the village is attacked  and the second as Lu Chan and Yunian go to find help for the village and the captured family members. The sequences are quite good, especially the battle over the kitchen, but by the time the film is done and the film is forced to end with us being told what happens instead of seeing it happen. Its a major disappointment- especially since through much of the film I was hoping for another film in the series. (though the fade out kind of promises a third film- but I don't see the point)

Taking the Tai Chi films together I'm mixed. The first film  was good but  kind of too much focused on the action and steampunk stylings to really truly work.  This second film is much better, but it's hampered by the connection of the previous film (you do need to see it to understand what is going on)  but once the shift from carefully worked out story to action set pieces occurs the film races to the conclusion which doesn't work because it's told to us instead of being allowed to move us by our seeing something happen.

Are they worth seeing. Yes, but I'd go the rental route
Posted by Steve Kopian at December 30, 2012