The film was picked by David, one of the members of the Subway Cinema steering crew. All I ca say is thank you because I now have a new favorite Chow Yun Fat film.

The plot of the film has Chow's police Sargent hooking up with a younger cop to take on a gang of Thai drug smugglers. The plot which involves,in part, one of the smugglers and his sister double crossing the gang, Chow-s womanizing, his sister, and assorted other tid bits doesn't really make a great deal of sense, but at the same time it does allow for frequent action sequences that are amongst the best, if least seen, in Chow's film career. I don't remember seeing him actually have a real martial arts fight with anyone before.

The film is frequently funny in part intentionally, Chow's a funny guy and some of the situations, such as the pants scene are funny. Occasionally the film was unintentionally funny as it was clear that the subtitles don't match what is being said, a fact revealed by subtitles that mistranslated the English dialog. 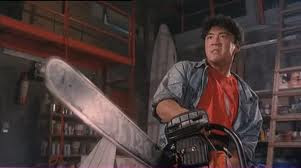 The real selling point here is the action, it only really stops to move us from place to place. To be certain it's over the top, the yo yo shot gun and the chainsaw fight for example, but at the same time it's riveting and damn entertaining.

This film is an absolute blast. Watching the film I was roaring with laughter and actually leaning forward in my seat, my arms resting on the seat in front of me as if I was curling up with a good book, or a favorite story in front of the fire.

My question is why the hell isn't this film better known? Made just before Chow Yun Fat hooked up with John Woo and had his career set, this film is, in its way, a hell of a lot more fun then either The Killer or Hard Boiled. This film is amazing, and as Grady Hendrix of Subway Cinema said, it's possibly the best Jackie Chan movie that Jackie wasn't in...

...I would modify that statement since Jackie never really made films as nasty as this. People die, often badly. There is also a streak of the misogyny that appears in many Hong Kong films of the time, as one of the characters is abused and mistreated...and then falls in love with her abuser. The violence toward her is a bit uncomfortable since we don't know where it's really coming from. I'm not against the nastiness, actually it adds a nice edge to the film, all I'm saying is that Jackie Chan, until relatively recently never went this dark.

I'm not sure of the status of this film on DVD. It is out there but it seems to be more on the resale market.  I'm working on running down a reasonably priced copy, because this is a fantastic film. I'm so interested in finding the film that Mr C and I wandered through Chinatown trying to find the film. No one had it, but it can be had on line.

DO yourself a favor see this film. 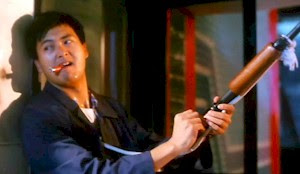