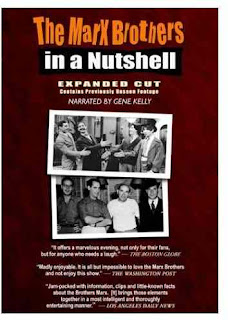 Excellent biography/appreciation of the Brother Marx that clearly shows why they were and are so popular.

This is a really good film that nicely balances information on the lives and times of the fellows and managing to show us what they do best. To be certain the film isn't a fact filled march through the lives of all concerned, its an over view that beautifully lays out everything you need to know to have a working knowledge of the the brothers.

Best of all the film shows some excellent highlights from their films that not only give you a taste of their madness but also manages to make you want to go out and see the whole films.

If you want to know how good this is, the producers also made a documentary on WC Fields called WC Fields Straight up which is essentially the same thing for Fields, however it doesn't work as well since the biographical material is too scant and poorly handled and the clips chosen are either too brief or aren't the best at revealing why Fields was so popular in his day. A better way to know this is a great film is that I will put this on when I feel like seeing Marx madness but don't know which film to watch.

A must see for any comedy fan
Posted by Steve Kopian at December 17, 2012