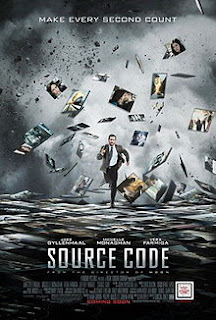 Duncan Jones follow up to Moon is another case of a film being wildly over hyped in advance of its public screenings. This is another twisty turny film that doesn’t quite hold up as well as Moon, but is still definitely worth seeing.

The plot of the film has a secret government agency trying to find out who blew up a train. The information is needed because the bomber maybe tied to a larger scale terrorist attack. The means of their attempt at finding out the information is to send one of their agents back in time to take the place of someone killed in the attack. The scenario begins to play out over and over again as our hero is sent back again and again in order to unknot the events as he learns more with each trip back. But there is a complication, romance… and there other twists to be revealed.

This is a very good thriller. It’s not as many people claimed in prerelease reviews, the next big thing since the director’s Moon (which was the previous next big thing), but it’s a damn fine little film.

How you react to the film in total will depend upon the revelation of one of the twists that comes somewhere early in the film. How you accept the twist will color everything that follows. I know some people who’ve called it stupid and shut it off, and I know others who thought it was neat and went with it. I’m someone who was accepting of the twist for the film but on the greater scheme of things it’s just okay. For me to accept anything beyond that- which the film asks us to accept- gives the film a case of diminishing returns. Yes the film remains good, but it doesn’t sustain the greatness of the opening moments.

My reservations should not make you think twice at try the film, its solid enough to see, it’s just something you’ll watch once or perhaps twice but not more than that. For me that’s enough of a recommendation for a rental, Netflix or viewing on cable.

(And apologies about not talking about the plot too much simply because there are too many twists that its all kind of spoilers)
Posted by Steve Kopian at December 23, 2012