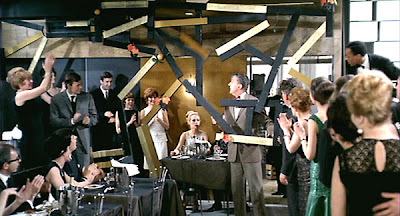 I saw Jacques Tati’s Play Time Thursday when it ran as part of Lincoln Center’s See it in 70mm series.

I really like the film and reviewed it back in September 2010.

I had always been told that the film really needs to be seen as big as possible because there are little things in the background that you’ll never see otherwise., while that may have been true in the days of pan and scan TV’s, however now with widescreen TVs you can see the film just fine. I didn’t see anything I hadn’t seen before. I will say that seeing the film on the big screen the film looked right for the first time. There is something about the film on a big screen that makes the images seem right.

Unfortunately seeing the film big slightly deflated it for me. The theme about how everything is steel and glass and all looks the same seemed to be too obvious since the building sets looked way too much the same, additionally the traffic patterns outside of the buildings never looked real. While I had always been bothered by the roundabout when I saw the film on DVD I was never bothered by what was happening outside the windows, however on the big screen you can’t help but notice its all a set.

I do have to say that I did make people’s eyes glaze over at the screening. The run time for the film was posted as 155 minutes, a physical impossibility since the fullest restored version of the film is 126 minutes (Tati cut the film down during it's initial release). I had murmured something about the running time to no one in particular when I saw it listed and someone on line said that it was a restored version of the film. I said the fullest version of the film is 126 minute one. They then insisted that they wouldn’t say the film was a certain length if it wasn’t that length. This then expanded into a slightly wider discussion of how do you know. When the film ended, at about 1 hour and 55 minutes I could hear one of the people I was talking to questioning why the film wasn’t as long as advertised...
Posted by Steve Kopian at December 28, 2012