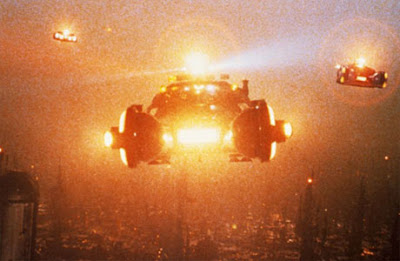 Okay, let me get something clear from the get go. I'm an early adopter of Bladerunner. I was there literally there at the start of the public screenings, having been in the packed theater at the first showing of the film on opening day at the Manhasset Cinema in Manhasset New York. I was there at the start trumpeting the film as a really good science fiction noir.... so my question is at what point do the film get co-opted and turned into one of the greatest science fictions films ever made?

Despite being one of the early adopters of Bladerunner I don’t consider it one of the greatest science fiction films ever made. Certainly visually the film IS one of the greatest, but I find the story simply a ripping good yarn and not necessarily a great film. It’s a film noir in new trappings or a western set in a big city. Strip out the humans vs androids angle and it is like any other similar film. To me the whole android angle isn’t really required for the film to work, and in some ways it simply inflates the film.

Yes I know the whole question becomes is Harrison Ford an android or not is key for some people, but I don’t think it matters. Why is it important, because he is essentially hunting his own kind? And if everyone was truly human it wouldn’t make a difference? Shades of a western where the Indians help the whites track their people. It doesn’t add anything.

Actually it complicates things needlessly, especially in light of all that was chopped out of the film and certain clues left in the film about Ford’s background. If you look at the clues in the film and how it was presented in various forms Ford would be too old for Replicant. He has too long a history. Rachel’s existence as a limitless droid is said to be a new thing so Ford really couldn’t be one.

It amazes me how people have complicated what is a painfully simple story.

And while I’m talking about things , I like the narration. I do I really do. Sue me but I’ve tried to watch it without it and it bores the living shit out of me. Without the narration the film is a series of long silent sequences with people staring at each other where we have no idea what is going on.

What is anyone thinking? Without the narration you don’t know. Most of what we know comes from the narration.

Alternately I have yet to meet anyone who truly loves Bladerunner who first saw it without the voice over. Of the two people I’ve met who saw it sans VO both felt kind of lost and felt that the film was a tad pretentious without it.(Yea I know not a big sample size but it’s what I have to work with since most people I know have already seen ittoo  many times.)

Don’t get me I really like the film, I think it’s super, but at the same time I think the film isn’t quite as mythic as some people make it out to be.
Email Post
Labels: american noir on further review science fiction