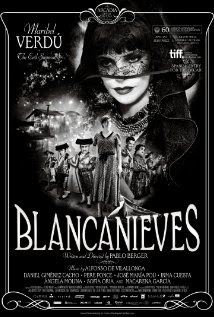 Blancanieves, Pablo Berger‘s riff on the Snow White legend is Spain’s entry into the Best Foreign Language Oscar race. On the face of it it’s an odd choice, considering that the film is silent except for some singing on the soundtrack, on the other hand it’s a damn fine film and a great way to open Lincoln Center’s Spanish Cinema Now.

The plot transports the story to Spain in the 1920’s . Antonio Villalta is a great bullfighter. He is gored and broken in the ring while is pregnant wife watches. While he is carried out she goes into labor. He is left paralyzed and she dies in childbirth. Their daughter Carmen is shunned by the father who doesn’t want to be reminded of his lost wife. Encarna, one of the nurses worms her way into his heart and marries him. Carmen is sent to live with her grandmother. When the grandmother dies, Carmen is sent to live with her father Antonio however Encarna refuses to let father and daughter meet until one day she sneaks in and warms her old man’s heart. However the evil stepmother finds out and conspires to keep them apart. I won’t give everything away but eventually Carmen finds her seven dwarfs, or rather six bullfighters.

Berger said that he made the film so that audiences would be forced to feel things through the use of music and image. He succeeded in spades. This is a wonderful film, that coupled with a certain Oscar winner proves that silent films aren’t dead when they are done right.

Actually I would argue that this is a better film than that certain Oscar winning film and manages to pay homage to the long lost days better, but that’s an argument for another day.

Driven by the score by Alfonso Vilallonga, which is one of the best scores I’ve ever heard, this is a movie that truly moves you without a word. This is a score for the ages. I'm guessing I'll put the DVD and just play the film to listen to the music. 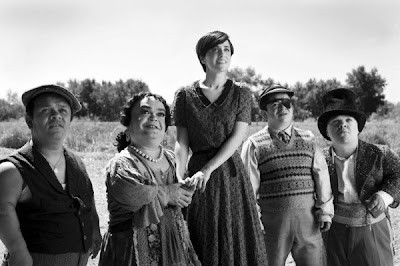 The images in this film are amazing. This is a film that looks and feels like a film from the 1920's. this is high art MGM or Hollywood in the late 20's. Berger has the look and feel down shot for shot. And if the film veers into subject matters that wouldn't have been dealt with in the 20's who cares, this isn't the 1920's.

The cast is a cross the board super . Everyone is perfect pretty much through out. To be certain a couple of moments here and there come across as over emotive but that's okay, even the old movies occasionally were that way.

I do need to single out Macarena García as the older Carmen. She is amazing and she carries the second half of the film beautifully.She has won my heart and soul in a way almost no woman ever has. She has a smile to die for and I hope some day to meet her in person just to see if it's as lovely in real life.

You need to see this movie. Its amazing. But be warned it's can be extremely emotional. Several sequences had me misting and the final shot... well the less said about that the better, except that it rocked my world and I staggered out of the film deeply effected, so much so it colored the rest of the day.

I can't say enough good about the film- this is why I love movies to see and feel the things this movie show me.

It plays Friday at 630 at Lincoln Center and if you know whats good for you you will be there. 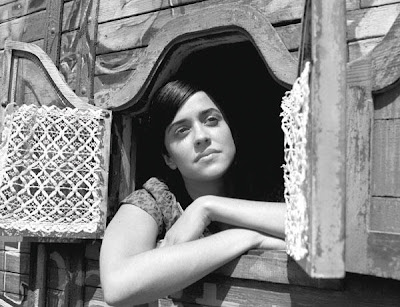