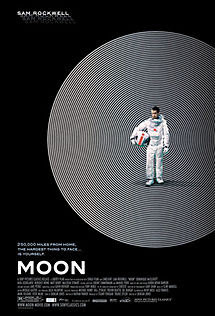 Moon was super hyped as being one of the greatest science fiction films of all time when it was released. It was viewed by many people as the science fiction equivalent of the second coming of Jesus. While I feel that the film is a great one, I think the super hype was misplaced, a fact that the films fading into the background in recent years seems to support.

The plot has Sam Rockwell as the sole caretaker of a lunar mining facility. Nearing the end of his three year term all he wants to do is go home. His only companion is an all-powerful computer named GERTY (voiced by Kevin Spacey). As time goes on Rockwell begins to break down and he thinks he may be seeing things…

The power of the film is not knowing where it’s going the first time through. The films twists and turns are best discovered for yourself. The twists are worth discovering.

The film ‘s real joy is Sam Rockwell. He was always a good actor, but he tended to play quirky roles so I always saw him as quirky guy. Here he plays a straight role and he ultimately breaks your heart. This is a guy who just wants to go home and see his family, but because of his job has been stranded a quarter of a million miles away. You feel his pain as all he wants to do is see his wife and daughter again.

I should point out that anyone who doesn’t like science fiction films, should make a b-line for this since the film is about more about being on the moon. Had the film been set in Antarctica it would have worked just as well.
Is the film the second coming? No but it is one of the best science fiction films of the last few years
Posted by Steve Kopian at December 22, 2012