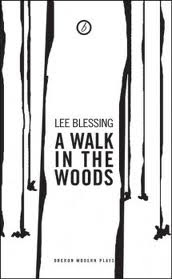 A Walk in the Woods is Lee Blessing’s inspired on a true story play about of what might have  happened when an American arms negotiator and a Soviet counterpart took a break from the negotiating table and went for a walk in the woods. The original incident happened one time and by all accounts wasn’t anything special other than the fact that it happened. In Blessings play the single walk of reality is stretched to include many walks.

The arc of the play starts with inexperienced American negotiator Sam Waterston (before Law and Order) taking a walk with old hand Soviet Robert Protsky. Waterston is super uptight where Protsky is not. What the motives are for Protsky isn’t completely clear at first but it soon transpires that not only is he looking to get a measure of his American counterpart, but that he’s looking for a way of discussing matters that can’t be discussed at the table. Informality brings success and ultimately friendship. What the play is about how if you strip away all the BS people are people and if we see each other as humans we not only can bridge differences but find friends.

Extremely well written the play was optioned to be a feature film at one point. I believe that the fall of the Berlin wall and the fall of the Soviet government made a film version at the time unlikely, which is sad because the writing is so crisp that I would love to see how two well chosen stars would have handled the material.

Protsky and Waterston are fantastic in their roles. Protsky is just a big friendly Russian bear and the sort of a guy that you want to take home and have dinner with. Waterston plays almost a less strident version of his Law and Order character before he would have figured out all of the worlds problems. Their interaction is a real joy. It's so nice to watch two old pros tear up the stage with the greatest of ease.

Watching the show recently (I taped it when it ran on PBS) I was struck by how much the the play hasn't changed. Sure the Soviets are gone (possibly to be replaced by the Russians)  but the idea of two arms negotiators needing to talk away from the table is still with us. In researching the TV version I've discovered that the play has found new life around the world where ever two sides are at odds and trying to prevent war.

As with four of the five plays this week I have no idea what the home video status of the shows are but if you get the chance, do see this heart warming and thought provoking hopeful play.
Posted by Steve Kopian at December 25, 2012