Four horror films from a sleepless night GHOST MAKER, EXCISION, RISE OF THE ZOMBIES and A LITTLE BIT ZOMBIE

Late Sunday night, fueled by too much caffeine just before bed time I ended up wide awake and staring at the ceiling. In order to pass the time I cracked into one of the mountains of movies that fill my abode for a few something to put me out. Sadly I was up most of the night watching horror films. 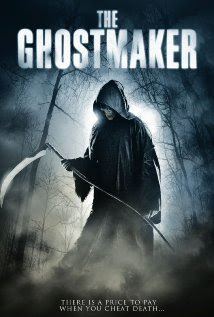 THE GHOSTMAKER is neat little film about a coffin like box made by a man described as the evil Leonardo DaVinci . The clock work mechanism will allow anyone who lays in the box to experience what it’s like to like being dead. The box comes to the attention of the main character when he is hired to remove some garbage from a home and is told specifically to take the box to the land fill and make sure its buried. He senses a possible pay day and investigates what it is. He and some friends then begin to use the box and as can be expected mayhem ensues.

Very much a B horror film that would have been the sort of thing that William Castle might have made with some sort of gimmick, the film now feel like a good but much too long version of a Tales From The Darkside or similar show episode. I was pleasantly surprised and wouldn’t have a problem saying give it a shot on Netflix or cable (just don’t have too high expectations.) 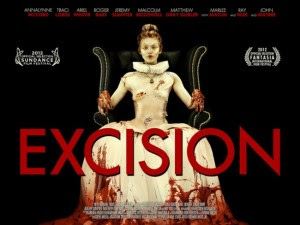 EXCISION poses a huge problem for me. It has a huge cast of celebrities in essentially cameos. It has a knowing deliberate attitude that doesn’t really work, and yet it has images and moments that are among the most disturbing of the year.

The plot of the film has a homely young outcast, who is forced to watch over her younger sister, and who is aroused at the thought of performing surgery, falling deeper and deeper into madness. As her life gets more and more out of control her fantasies take over her mind.

The non-fantasy outsider deals with life and humiliation stuff is so mannered and so deliberate and forced that it doesn’t play all that well. Anna Lynn McCord as Pauline our heroine is forcibly made to look ugly and it never rings true. Equally never ringing true are many of her conversations with the stars which are done in two shots across tables and desks with intercut close-ups for an effect that feels incredibly artificial.

And then the film will slip into the fantasies and the real life horror and the film will suddenly, shockingly spring to life. The images, some of them fleeting, are really disturbing. Its graphic fetishistic blood and gore done exactly right. I really wish they had made the whole film like that, but on the other hand perhaps had the whole film been that way they wouldn’t have been so special.

I’m really mixed about the film, over all I don’t think it works but the moments of horror are worth checking out for those are interested in the macabre but won’t care the whole film doesn’t work.

Actually the final moment disturbed me so much that I couldn’t sleep. 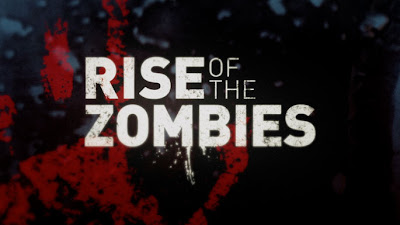 Reaching back into the pile I grabbed a copy of RISE OF THE ZOMBIES. This is a SYFY zombie film they ran not long ago. One thing on line said it’s a semi sequel to Zombie Apocalypse. I wouldn’t know I didn’t see it. Rise has a bunch of people leaving the safety of Alcatraz in order to find a scientist who may have a vaccine against the zombie plague. Low budget pay check film (stars like Levar Burton took it for quick cash) isn’t bad but isn’t remarkable either. It runs through the zombie film tropes with wild abandon but not to much effect. As a low rent TV movie it’s not bad. As anything else it isn’t really worth the time. The last film I saw was something called A LITTLE BIT ZOMBIE, which is a film you either click with or don’t. If you click with it you’ll find it to be a funny horror comedy, if you don’t it’s a tough slog through forced humor. For me the tale of a guy bitten by a mosquito carrying zombie plague just missed. I could appreciate it’s knowing send up of horror movie conventions, but it was a much too knowing for my tastes. I’ve read some reviews that compared it to the Evil Dead films, and I see that but at the same time in the Evil Dead films the characters weren’t bending the fourth wall to poke us in the ribs.