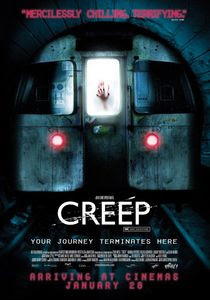 This is the story of a girl who ends up trapped in a London subway station after hours, and  as a result ends up coming face to face with a"creep" living in the tunnels and disused subway stations.

I had read about this film a while back and heard that it was pretty good. I stumbled upon it at a local video store and gave it a try. I was both pleasantly surprised and very disappointed.

I was pleasantly surprised because this is a well made, good looking thriller. In away its a form of the mad slasher lurking in the woods by the summer camp films, but it has a greater degree of skill behind the scenes. There is also hints of a great deal more going on than just an inbred psycho running amok. I also liked that the film has some really horrifying scenes, such as the Creep performing an operation (he performs all of the stereotypical actions we've seen in movies, but not with the same results.) I also loved that there are some characters you really care about. The people, for the most part, are not just fodder for the killing machine.

I'm disappointed in the film because there are HUGE gaps of logic that work against believing the film.SPOILER WARNING: A mystery train shows up at one point, which I can accept, but not with a dead driver; a security man is killed in his office,how could he not be missed?; blood trails and bodies are left all about, how could anyone not notice? Actually thats the real problem, how could this guy behave like this and not be noticed earlier? London after all has a reasonably well monitored subway and I can't believe the madness in the stations wouldn't have been witnessed on the screens somewhere. Clearly what happens during the film would not be his normal behavior. END SPOILERS.

In watching the extras on the DVD it became clear to me that the writer/director isn't a very good writer. Certainly he can direct a chilling film, but I have to question his ability to write one. Listening to his comments, it seemed to me that he can put sequences together that work onto themselves, but that don't work in the narrative whole. This film is flawed because the story doesn't really flow from piece to piece. Still you can't take away from the fact there this does raise goosebumps a couple of times because it is so well made.

Ultimately this is a good film, but not a great one. The more forgiving you are the better it is. If you like horror films I'd give it a shot, but as with many of these things your mileage may vary.
Posted by Steve Kopian at December 15, 2012