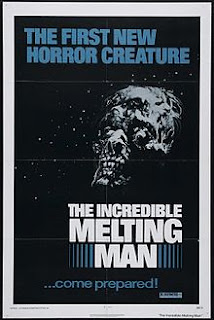 One of Rick Baker's early materpieces.

I don't think this film ever played near me when it had it's brief theatrical run. I know I would have made an effort to go if it had. It's probably better that it never did because this movie is a dog and then some.

The plot of the film has Three men going to Saturn. They return...damaged. As the film proper starts Steve is in a bed bandaged from head to toe. He is in a hospital. He wakes up discovers his liquifying hands, freaks out and then runs off into the wildrness where he is hunted by the doctors who want to understand his condirtion and the cops who want to stop a mad killer.

Thats the plot, there is nothing else, just watching the oozing man stagger across the countryside while people give chase.

If the Mystery Science guys never did it either Riff Trax or Cinematic Titanic should.

God it's awful. From the dialog, to the weird occurances, a fleeing nurse doesn't open a glass door she runs through it, when Steve's lower arm is cut off we later see his entire arm gone, and when his eye ball falls out at the start of the film, we see it later perfectly fine...

This is a turkey, it really is...but it's also a party film for those who don't mind the ooze.
Posted by Steve Kopian at December 08, 2012