The second half of the year saw Hollywood try to make monsters and horror family friendly. The result was three films that received good reviews critically but were uneven at the box office, with one, Frankenweenie pretty much being the Two in the One Two punch of Tim Burtons disastrous year at the American box office.

Being a full on monster nut I took in all three films when they were in theaters and have combined reviews of all of them into one super review. 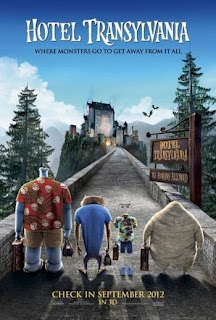 HOTEL TRANSYLVANIA was the last of the films released. It comes, after a long series of directors, from Genndy Tartakovsky, best known for a slew of Cartoon Network shows. The film tells the story of Dracula, who has built the title hotel in a hidden location so that monsters will have a place to feel safe from the evil humans. On the occasion of his daughters 118th birthday Dracula has brought together all of his friends and their families to celebrate his daughters birthday. She on the other hand just wants to go out and see the world. Complications arise when a human stumbles into the proceedings and falls for Drac's daughter.

Straight on silly comedy is voiced by the likes of Adam Sandler as Dracula, Steve Buscemi as the werewolf, Kevin James as Frankenstein and others. You would think it would fall into typical Sandler comedy since it has a good number of his stock actors in it but, under Tartakovsky's nuanced direction they turn in great performances.

The opening and closing quarters of the film are the best part, with the first part being wonderful send ups of horror conventions and throw away monster jokes; and the final 20 minutes or so packing an emotional punch as everything is put together into a feel good ending.

The trouble for me is is the middle of the movie which, while having some killer one off jokes, shackles them to a cliche story of Dracula trying to keep his daughter away from the human,whom, despite his best efforts is changing him and everyone around him for the better.... damn that sounds better than it plays out. It's not fatal but it kind of makes what should have been a great film  just a good one instead.; I mean look at how wonderful the first and final parts of the film are...

FRANKENWEENIE is the second remake of Tim Burton's short film. Previously it was made into a live action feature film which was so bland I've erased it from my brain despite having seen it several times back in the VHS days of home video. 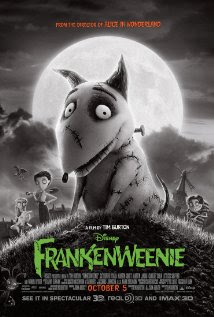 The plot of the film has a young boy bringing his dead dog back and the complications that arise from it. In this case its everyone playing resurrectiionist for their own science fair project.

A dark moody tale, this film, is like many Tim Burton films, a box office disater that will be destined for a long life on home video. I completely understand why parents and audiences aren't flocking to it, since black and white aside, this is a rather somber affair even with the laughs.

I like the film. Its something that was clearly made with a great deal of love and affection. This is a modern homage to old school horror (you'll see so much riffs on old Universal, Hammer and giant monster movies, rather wholesale thefts). For the most part it nails everything right on and then some to create it's own black confection.

The trouble is that at a certain point the film gets wildly out of control with too many creatures wandering the fair ground. Yes it allows for any number of very clever and very funny jokes and send ups, but it also causes the film to lose focus with the result that the end doesn't have the complete kick in the ass it should. I don't know whether to be pissed off because if the film didn't have to have a certain running time to get released it could have been a tighter better film, or to be happy that it is as long as it is because it allowed for some of the jokes to exist.

Definitely worth seeing when it hits home video. 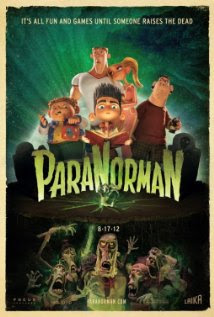 PARANORMAN is the story of misunderstood Norman, who is cursed with the ability to see and speak with the dead. No one believes him, other than his crazy uncle who also can see the dead. When his uncle warns him that a witches curse is going raise the dead, Norman doesn't really believe him, until weird things happen and his uncle dies. When Norman tries to stop the curse by reading at the witch's grave he realizes that she was buried somewhere else. In order to stop the curse Norman must now try and find the grave before it's too late.

Well received by both critics and audiences Paranorman is an amusing  little film about the things that fear makes us do and how that often is wrong. It's a wonderfully ghoulish film makes it okay to deal with ghoulies and ghosties. It witty and funny and frequently charming.

And in a weird way thats exactly whats wrong with it. In trying to be both scary and funny, it kind of  undercuts both the scares and some of the laughs. I think that the problem lies in the fact that if you strip the zombies out of the film and have Norman's gift be anything other than speaking with the dead this film is dead nuts carbon copy of any other outcast makes good story.  Seriously this is the age old story of  the special talent saving the day that Hollywood has been  doing for decades, but with funnier jokes and horror movie references.

No it' is not a bad movie, rather its a more conventional one than anyone is saying. To be certain it has better jokes and hipper references but ultimately there is no reason for this to be zombified. (On the other hand it's clear why Frankenweenie is the way it is. You can't tell that story any other way...nor could it have been told by anyone else)
Posted by Steve Kopian at December 31, 2012