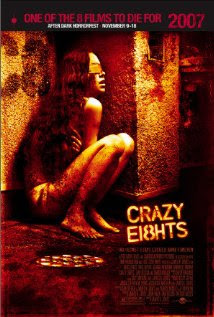 Friends reunite for the funeral for one of their childhood group called "The Crazy Eights". They are left a box and told to open it together. Inside the box is a map which leads them to a house where they find a trunk…and more revelations as the group ends up at the ruins of a hospital where things begin to go wrong and they begin to perish. Its not giving anything away to say that the adults met when they were children taking part in psychological experiments (The opening text implies as much) and that the hospital is found out to be the place where they were "tested".

I liked this film a great deal. Its not perfect but there is something edgy about the way its put together that I found frightening. I liked the rapid editing in some sequences that make it seem as though you've caught something out of your eye. More than once while watching the DVD I backed things up to see if I saw what I saw. With in one or two seconds there are times when the picture shifts and we get images, children, faces, ghosts mixed into the action. I know this bothers some viewers but it kept me on edge since it made it seem like the ghosts are real or that it was the mind of the characters breaking through. I liked that the camera didn't hold on the visions since it allowed for my mind to take over. Or in the case of some of the deadly appearances the small motions on the edge of the frame just before the next scene makes you wonder what you just saw.

The script is an odd mix of the sort of thing you'd find in this type of film, and some touches that blur the line about what you are seeing. Is the film now or then or something else? I don't know. The film is constructed as a film taking place in the here and now but there are clues that that may not be wholly the case. The final sequences (which many people don't seem to like) I found oddly affecting. What exactly are we seeing anyway? I'm not sure. Just as I'm not sure about the intrusions of the memories through the earlier parts of the film, but its in a good way since it requires me to think about what I'm seeing. I think if the director had been less sure of himself the film would have collapsed on itself, something the film is never in danger of doing.

The acting by the reasonably well known cast (Frank Whaley, Tracy Lords, Gabrielle Anwar) is good, if somewhat histrionic. Clearly they are aware of the films limitations but are trying to at least go for it.

I liked it. I think this is worth a look