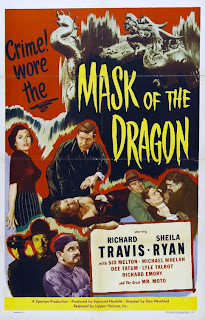 MST3K material has a GI in Korea make a deal to bring a jade dragon to the US. Upon arrival he's stabbed in the back and his partner, a private eye investigates.

Road accident film has to be seen to be believed. I put it on in order to fall asleep to and instead found that I was watching and laughing my way to the end . From the white guys playing asians, to the sterotypical portrayal of Asians, on to the organ background music on to any number of things this is a movie to get your friends together and make fun of.

I can't believe that this film got a big DVD release in the Forgotten Noir series from VCI. This is one of those films that should have remained forgotten.

This is the perfect game film to get your friends drunk. All you need  do is take a drink anytime anyone watching asks "why did..." For example. Why do they kill the soldier when they could have just taken his bag? Why does one bad guy have gloves on when rifling through the bag and the other one doesn't? There are more, sually one every couple of minutes...

How tightly plotted is this film? Apparently the 54 minute full version also has a version a half an hour shorter, a fact which will be readily apparent when you see some of the odd ball asides (Musical number, odd actor rehearsal sequence..)

This is a so bad it's good film, that you'll enjoy for all the wrong reasons, many of which will be more apparent with friends drinks and snacks.
Email Post
Labels: american crime mst3k material mystery