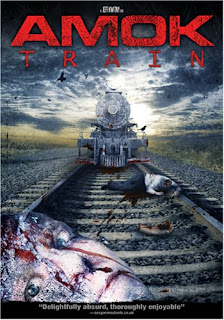 Retitled for no really good reason as Beyond the Door 3 and released some 12 years after the second, unrelated film (though right in the middle of home video boom which Beyond the Door 1 & 2 were frequent renters) this film is also known as Death Train (a title which shows up on several other films) This is a film best described as Runaway Train meets Christine meets the Exorcist but completely over the top.

The film has a bunch of American students going overseas to one of the Balkan country in order to see some obscure religious rite. What they don’t know is that they are to be sacrificed to Satan. When their sleeping quarters are set on fire, most of them manage to escape into the woods. Running for their lives they stumble on to a slow moving train, which all but one manage to get on board. As the group semi-relax figuring they are safe they find out that they are not. Satan has taken control of the train and has it speeding everyone toward their appointed doom.

Cheesy, gory, unintentionally silly this is one of those films I kind of feel bad about liking, but then again it’s the sort of thing that rotted my brain in the mid to late 80’s on VHS tape. Reasonably well made, with a good sized budget for this sort of a movie (it would have to because of the extensive train exteriors) this is in some ways a cut above most other gory horror films from the period. Things look good. Sure the make-up effects are uneven, and occasionally silly, but at the same time they are bloody and disgusting, with severed heads and melting faces…

…I so missed not having a huge bowl of popcorn when I saw this.

Is it art? Only in the blood soaked way that Euro-gore films can be called art.

Is it scary? More creepy than scary since the film is never quite smart enough to be truly scary but there are times when it pulls image, sound and idea together to produce a moment that is creepy.

If you like this sort of thing, as I know many of you do, I think it’s worth a shot. If you can stay through the cliché set up the film really gets going once it gets on the train. I know the film can be had cheaply on DVD and it’s on some streaming services so you won’t be out much.

One thing to keep in mind, especially if you have only seen this on TV or VHS prior to the letterboxing or widescreen releases- Shriek Show has put out the film as a restored widescreen release. It’s a beautiful scope film that fills the frame. You have never seen the film look this good… and trust me it plays so much better widescreen- to the point I have a vague recollection of seeing this on pan and scan VHS and disliking it because it looked so bad… the widescreen image adds a great deal.
Posted by Steve Kopian at December 12, 2012