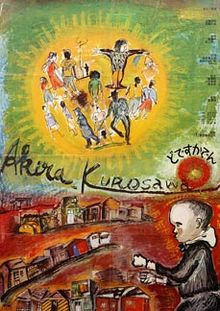 The title is the sound that one of the characters makes as he drives his imaginary trolley across the garbage dump where the characters live. The film is based on a series of stories by Shugoro Yamamoto and tells the story of a group of people who effectively live in ramshackle homes on the edge of the dump. It's a mix of laughter and sadness.

First color film made by Akria Kurasowa has been something I've wanted to see for a long time. Weirdly it was often listed as being only available in a shortened version cut way down from a three or four hour. The reason for this is due to an error in the run time in some promotional material. I never watched the film becaue I was always holding out for the full version, I was waiting to see what Kurasowa wanted us to see, only to find out on the recent release by Criterion that the 140 minute version is the full version.

After finally sitting down to see the film I'm of mixed emotions about it. First and foremost its visually linked to every film that followed. You can see every other of Kurasowas remaining six films reflected in this movie, down to the painted sunsets. Its a striking film in its use of color and you can understand why it took him so long to find a film stock he would he happy with (of course there are failed projects as well). The film is a visual work of art.(Though be warned if you're going to see this on your widescreen TV this was shot 1.33 so will appear in normal TV ratio.) The rest of the film is a mixed bag. Part of the problem is that the lives of all of these people don't quite come together. As separate tales they all work well but as a filmic whole they don't hang as one. I don't blame Kurasowa since one can't always hit things out of the box, especially when some one like Robert Altman who specialized in multi-character films of this sort occasionally bombed himself.

This isn't to say that there aren't reasons to see the film. As with all Kurasowa films there are always reasons to see his films, whether they work or not. The first trip of the "trolley" is one of the best things Kurasowa ever did and is worth the price of a rental. Its one of the most magical moments in film history as the trolley is inspected and taken out. The father and son living in the car is touching (though ultimately very sad) and there are other bits and pieces that shine (like the cast which is across the board great) and one should at least try the film as something different from a man we usually associated with samurai films or crime dramas.

Its an intriguing misfire from a master filmmaker which means in this case means its better than most other filmmakers successes.
Posted by Steve Kopian at December 07, 2012