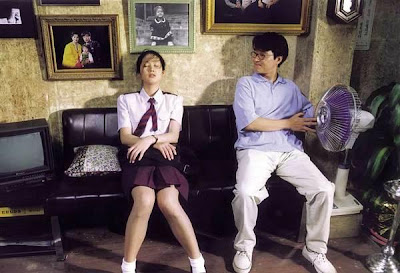 Tuesday at 7PM the Korean Cultural Service will be showing the excellent CHRISTMAS IN AUGUST. I reviewed the film two years go where I called it very good. (Warning the review has spoilers) I've seen it since then and my opinion has increased, I've also replaced my VCD copy with a DVD.

The plot of the film follows the relationship between a young woman and a camera store owner who is ill. Its a very off beat love story at least by American standards in that neither one ever says what they feel. That doesn't mean the film isn't moving, it is, with a fade out that affects me more each time I see it.

Unlikely ever to be remade in the US (thank god) this is a super little film that really is worth the time and effort to go see. Honestly If I hadn't recently watched the film again I would be heading there myself.

If you've never seen the film, go see it, you will be moved.

As always doors at 630 and movie at 7.
Email Post
Labels: kcs