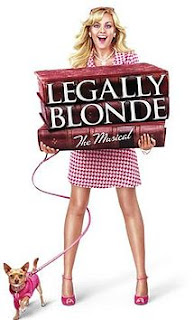 The Broadway musical of Legally Blonde had the misfortune of booking itself into one of the biggest theaters on Broadway. It’s not that the play was bad, rather that the Palace is so big it couldn’t cover costs which were largely the result of costs being dependent upon the size of the theater- the bigger the house- the bigger the potential return, the higher the fees. I’m convinced that had the show been in a smaller house it might still be running.

I mention the fact that the show was in a big house and desperate to put butts in seats because the producers did a completely counter intuitive thing, they taped the show and allowed MTV to run it several times during the early days of its run. Why would anyone go see the show when they could see it for free on TV? Because you’re seeing it live and without commercials. The idea was that if people liked it on TV they’d go see it live. I think the idea worked for a while before the cost of running the show forced it to close.

I saw the show a couple of weeks before the taping and I had a great time, actually I like it a great deal more than I like the original movie. I did what any fan of the show would do, I bought the music, talked it up and contemplated going to see it again. I also ended up taping the show when MTV ran it.

The show as presented on MTV was exceptionally good. While it was clearly a taped stage show, the TV version actually played well enough that you forget that and just take it for a being a live TV event. Its so good, thanks to the great cast, that I’m not surprised it did put butts in seats to see it live.

The problem with the show on MTV was the commercials. The breaks every couple of minutes wrecked the flow of the show. I had to tape the show and watch it that way to really enjoy it.

To be honest I have no idea what the status of the video version of the show is. I know MTV had the rights to show it a certain number of times, but I don't know if it ever did. I've also never seen any version of it on DVD. The best thing I can say is that if you do get the chance to see it, do so.
Posted by Steve Kopian at December 27, 2012